The Soulsborne Community is the most elite

The MMO Conqueror’s Blade offers you exciting battles that take place in a medieval world. So that you can get started, everything about the weapons, factions and content of the game will be revealed here.

What is the MMO about? Conqueror’s Blade is all about the Middle Ages. You slip into the role of a knight who tries to conquer castles, defend them or defeat enemies in the open field. In most modes you have units at your disposal that you command and lead into battle.

The combat system is very action-packed, but at the same time you have to be tactical in order to use your units correctly and not be overrun by opponents.

Outside of combat, you can equip your character in cities, improve your skills and exchange or level up troops. Craft NPCs, traders and a bank are available for this.

There is also some kind of open world that you can explore and gather materials to improve yourself. But watch out: There you will meet players who attack you and steal your collected materials.

This is how it goes in the world of Conqueror’s Blade.

What do you need to know to get started? Conqueror’s Blade focuses primarily on PvP, which always takes place in instanced battles. While there are also some PvE missions, the game basically revolves around the fight between the players.

At the beginning, your character receives a weapon that your play style is based on. However, the weapon can be changed at any time in the course of the game, so that your character can theoretically assume any role. Alternatively, you can also create several characters, between which you can easily switch.

At the beginning of the article, you will be introduced to the 11 different weapons that are available in Conqueror’s Blade. Then there is a preview of the different units, the game modes and the houses that you can join and for which you can go into battle.

11 weapons at your disposal

After creating your character, you will learn about 10 of the 11 existing weapons in the tutorial that you can use in Conqueror’s Blade. Only the battle hammer, which was only introduced with Season 3 on April 21, 2020, has to be unlocked first.

Here is explained to you what is hidden behind each of the weapons and how useful they are currently.

The double blade consists of two daggers that are wielded at the same time. This weapon is particularly suitable for players who like to be an assassin.

A special ability is invisibility, through which double blades can either sneak up on enemies or flee from combat. Attacks from invisibility always result in a critical hit.

Double blades are very strong, but not easy to handle. You wear light armor and therefore run the risk of quickly being overrun by enemy troops if you are not careful.

The glaive is a polearm with a cutting edge at the tip. It is perfect against lightly armored enemies in close combat. Despite the long pole, it can be used for quick attacks.

The glaive has many skills that deal AoE damage. However, the damage is not excessive. Especially in fast 1-on-1 fights with double blades and tough duels with short sword and shield, you will quickly get into trouble.

However, this makes up for the heavy armor that makes you more resistant to attacks.

If you would like to play as an archer, Conqueror’s Blade has two weapons to choose from. The short bow is the much faster and more mobile version, but it also offers a shorter range and less damage.

With an attack that poisons opponents and thus causes damage over time, the shortbow can also effectively eliminate running enemies.

Although the short bow only wears light armor, its range and mobility make it one of the best weapons for beginners.

The classic knight fights with a short sword and shield, but this combo is not that easy to play. It belongs to the medium difficulty, which is due to the fact that you only have a short range in close combat and also have to parry enemy attacks well.

This weapon combo is well suited for long-term battles, as your shield attacks reduce the attack strength and blocking skills of your opponents.

You wear heavy armor with this weapon. 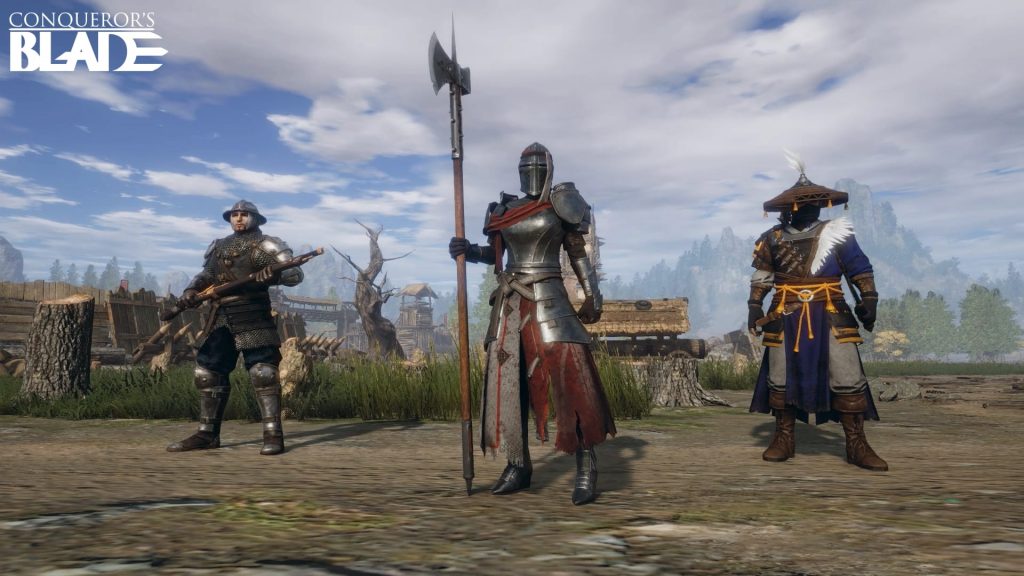 Conqueror’s Blade offers you different weapons and a character can theoretically use them all.

The longbow is the slower but stronger version of the short bow. With it you have a long range and can effectively eliminate opponents from a distance.

However, you are more susceptible to close combat than the short bow and lose if the opponents reach you.

With the longbow you wear light armor and should also try to always aim at the heads of your enemies. That causes additional damage.

If you are looking for a longer range than with the short sword, you can fall back on this effective weapon combo. It is a bit more beginner-friendly and, as a passive ability, also has a slow health point regeneration.

Otherwise, the long sword & shield also wears heavy armor and has various skills in which the shield is used as a striking weapon.

The first class of medium armor weapons in this listing is the musket. With her you can attack enemies from different distances.

While auto-attacking is useful from a distance too, many skills rely on medium or even melee range for maximum damage.

With the two-handed sword you can strike properly and cause high damage. You have a sprint ability to quickly catch up with the enemy.

The sword is based on medium armor and the difficulty is also in the medium range.

The spear plays in a similar way to the glaive and relies on a slightly larger melee range. A special feature of the weapon is that the head inflicts stab damage, while the staff inflicts blunt damage.

Players with spear in hand can wear medium armor at the same time. This is a little little for a fighter in the middle of the turmoil, which is why spearmen should play more carefully than swordsmen.

The battle ax is one of the most difficult weapons for beginners because it is very slow and sluggish. You carry a long staff, at the end of which is the ax head, but with which you can strike properly and cause damage.

Thanks to the heavy armor you can withstand a lot and are particularly effective against opposing troops, but you have difficulties against faster fighters like the double blade.

The Warhammer is the newest class of weapons in the game. She relies on a huge hammer with which you can attack enemies. She hits slowly but hard.

In a special skill you throw the enemy to the ground and then pick them up to carry them to another location. This can give you a distinct advantage in the game. The battle hammer also wears heavy armor and is therefore well armored against enemy attacks.

To unlock it, you have to complete various challenges in Season 3, which is also possible as a beginner.

The units in Conqueror’s Blade

What kind of units are there? There are over 70 different units available in Conqueror’s Blade. They are divided into:

They are divided into a system of 1 to 5 stars, depending on how strong they are. In addition, each unit consumes points if you take it into battle. However, you only have a limited number of points per fight, so you have to decide whether you want to pack a lot of weak or less strong units.

How do you unlock new units? New units are unlocked via the so-called unit trees. There are different origins in which the trees branch.

On top of that there are special units like the knight or the rattan, which have their own skill tree.

In addition, the new units of Season II and Season III are unlocked through special challenges instead of a unit tree. So you don't have to spend any honor on them, but instead achieve certain successes. 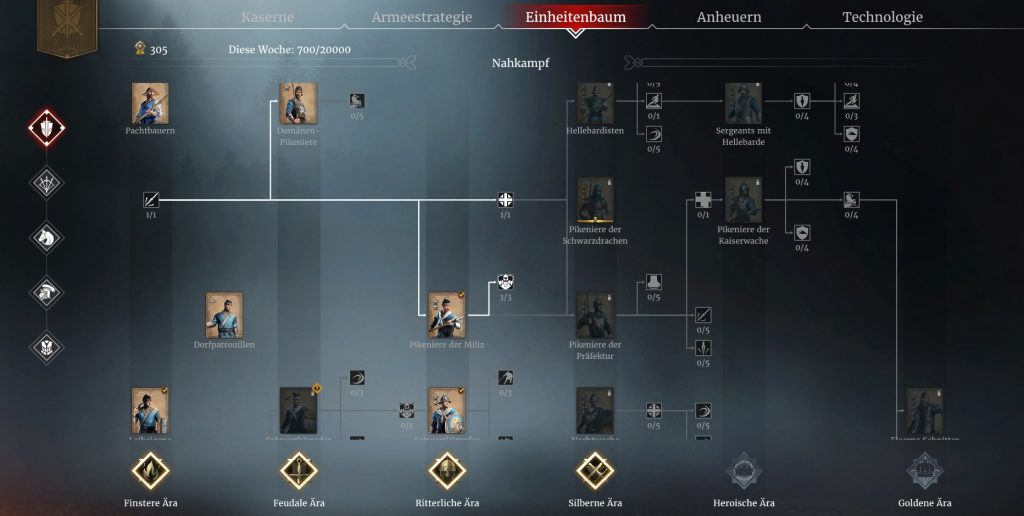 A section from the unit tree for melee fighters.

In Conqueror’s Blade there are different modes in which you can duel. Here is a brief overview.

In the training camp you fight a field battle against the AI. This mode is perfect for getting to know the game.

In a field battle you have to capture flags and kill opponents to reduce their score. The team that falls first to 0 points loses.

Prerequisite: Level 8 (usually reached after the tutorial and the first training camp)

This mode is about either taking or defending a castle. There are also various capture points that the attackers must capture in order to gain time and take the castle. 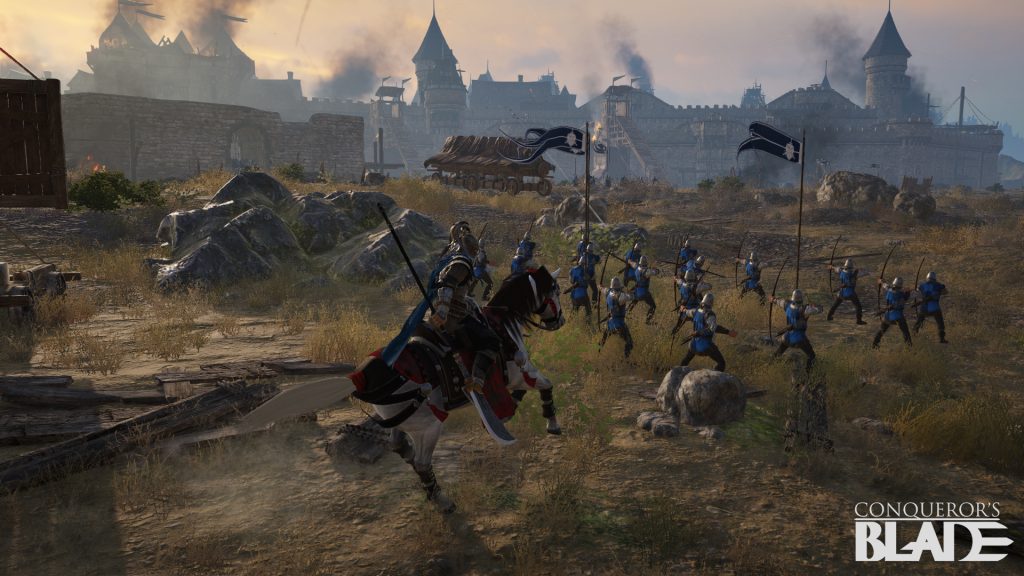 Siege a castle in an epic battle.

In the expeditions you fight together with other players against the AI ​​in an open field battle. These are available in different difficulties and they bring you materials to upgrade your equipment.

The free fights are special modes that only take place at certain event times. Just have a look at the Conqueror’s Blade event calendar.

Sometimes there is a field battle there, sometimes in a classic deathmatch without troops. There are special rewards for them.

The territorial wars also only take place at special times on Tuesdays and Saturdays and you have to be a member of a house. Battles for resources and area size can be waged in the open world.

Prerequisite: Level 15 for the levels and 25 for all content, member of a house

Damage to the units: permanent 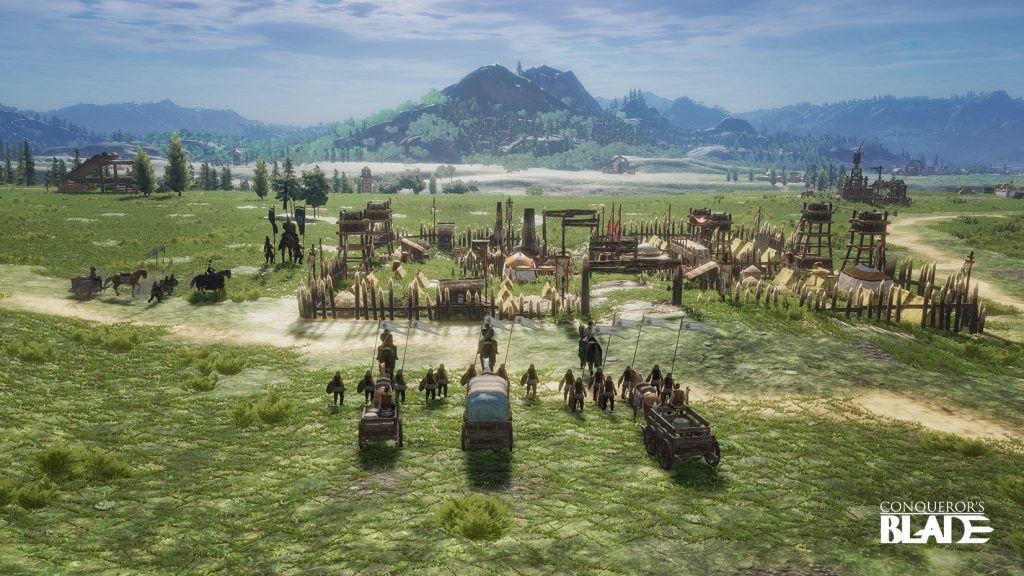 The Territory Wars take place in the open world of Conqueror’s Blade.

You can join one of the houses in the course of the game or found your own from level 10. The houses fight for territories in the open world to further expand their influence.

In doing so, they receive resources and gain influence on the world map. The stronger a house is, the more new members and fiefdoms it can have. In Conqueror’s Blade there is also a diplomacy system that can be used to forge alliances.

If this information has made you want to go on an adventure in the medieval MMO, you can create an account here for free and get started right away:

The article Conqueror’s Blade: What you need to know about the free MMO before starting appeared first on Mein-MMO.de.