Access to the specialist information exclusively for members and subscribers is now activated for you.

Wheat makes you fat, sick and stupid - this is what several authors claim in pseudo-scientific books. In fact, more and more people are abandoning foods containing wheat, even without a diagnosed intolerance. But are bread, pasta and cake really the cause of the complaints? 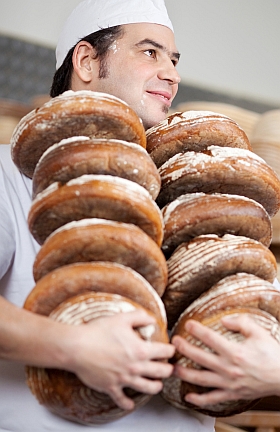 Wheat has been part of the human diet for around ten thousand years and is one of the most important staple foods worldwide. But lately it has been seen in a bad light: Various authors, especially American authors, claim that wheat is dangerous and responsible for numerous diseases. In his book “Weizenwampe. Why wheat makes you fat and sick ”, the cardiologist William Davis wants his readers to believe that wheat damages the heart, brain and skin and promotes obesity and diabetes. The neurologist and nutritionist David Perlmutter goes even further in his book “Dumm wie Brot” and names wheat as the cause of Alzheimer's, ADHD and Tourette's syndrome. Julien Venesson, French nutrition, fitness and health advisor, makes similar grave allegations. In “How Wheat Poisons Us” he depicts today's wheat consumption as the reason for rheumatism, osteoarthritis, schizophrenia, epilepsy and other serious diseases.

The theses of the authors mentioned are often torn from the scientific context, mix different facts with one another and argue with flimsy, tendentious reasons. Contrary to what is claimed, for example, the heart attack rate has not increased as a result of wheat consumption, but rather halved in the last 20 years. There is no basis for the fact that gluten in wheat has a similar effect to morphine and is addictive, promotes dementia or the types of wheat grown today contain particularly rapidly degradable carbohydrates. It is true, however, that modern breeding means that wheat varieties are now more productive and more resistant or have better baking properties. Wheat is also one of the allergenic foods and is often responsible for allergies among the types of grain. And with the growing consumption of processed foods, consumers are also consuming more gluten. The gluten protein occurs naturally in wheat and other types of grain. In addition, gluten is added to numerous ready meals, sweets and desserts because it offers food technological advantages and serves, for example, to bind water, stabilize or as a carrier for flavors. But ascribing diseases such as diabetes, obesity or dementia solely to the consumption of wheat or gluten is scientifically unsustainable.

When wheat is incompatible

It is undeniable that there are recognized clinical pictures that are associated with the consumption of grain. In fact, the number of people suffering from celiac disease has increased. About 0.3-0.5 percent of the population in Germany is currently affected by gluten intolerance. The German Celiac Society, however, assumes a high number of sick but undiagnosed people. In this autoimmune disease, the ingestion of gluten triggers an immunologically mediated inflammation. As a result, the intestinal villi regress and the absorption of nutrients is disturbed.

The diagnosis of celiac disease is made through the detection of specific antibodies in the blood and is confirmed with the help of a removal of intestinal tissue (biopsy). The only treatment option is to completely avoid foods containing gluten, because even the smallest amounts of gluten can damage the intestinal mucous membrane of those affected. The gluten white occurs in grains such as wheat, rye and barley, but also in older varieties such as spelled, emmer and einkorn. It is therefore not enough to just go without wheat.

In the case of a wheat allergy, there is also an immunological reaction against wheat proteins. Unlike celiac disease, these are IgE- or T-cell-mediated reactions against various wheat proteins such as gliadin, amylase trypsin inhibitors (ATI) or thioredoxin. Those affected are often sensitive to other types of grain. About one in a thousand people in Germany suffers from a wheat allergy. It can be detected by a skin prick test and IgE antibodies in the blood. Like other allergies, wheat allergy has also increased.

A third wheat intolerance is wheat sensitivity. Symptoms such as abdominal pain, flatulence and diarrhea, but also general complaints such as tiredness, decreased performance and general complaints can be similar to those of celiac disease. However, it has been proven that those affected do not suffer from celiac disease or allergy, although they react with clinical symptoms to wheat, barley and rye. In the 1980s, doctors discovered a supposed connection between gluten and the symptoms that occurred and called the intolerance gluten sensitivity. Experts like Prof. Detlef Schuppan from Johannes Gutenberg University Mainz and Harvard Medical School in Boston are now assuming that the gluten protein is not to blame and consciously speak of wheat sensitivity. The current S2 guideline for celiac disease speaks of non-celiac, non-allergy wheat sensitivity. In Germany, it is estimated that 0.5-7 percent are affected, women more often than men.

In studies, Prof. Schuppan's team compared the reaction of the immune system to old ancient grain varieties with those of high-performance grains that were bred. They found out that amylase trypsin inhibitors (ATI) are probably the cause of the symptoms. These protein components occur in cereals as natural defense substances against parasites and diseases. Since they occur together with gluten, it has so far been difficult to differentiate the cause of action.
"ATIs activate the so-called innate immune system," explains Prof. Schuppan. This mobilizes the immune system and there are slight inflammatory reactions in the intestine, but also in the rest of the body. The inflammatory process is mediated via a receptor, the so-called toll-like receptor 4. This intensifies existing inflammatory reactions. People with a wheat sensitivity appear to have a particular sensitivity. "We therefore suspect that the ATIs play a role in a number of immune and autoimmune diseases, such as inflammatory bowel disease, rheumatoid arthritis or multiple sclerosis," reports the scientist and gastroenterologist.

High-performance wheat as a polluter?

Due to the breeding of high-performance varieties, the content of ATI in wheat has increased. “The genes that are necessary for ATI formation were already in old wheat cultures. However, modern varieties contain about two to three times as many ATIs as older varieties; in spelled there are about half as many as in modern wheat, ”says Schuppan, explaining his research on the incompatible protein components. “ATIs are mainly relevant for wheat, barley and rye. Their presence is very much linked to the gluten content. "

Even if the presence of the ATIs is linked to the gluten content, there is no need to completely avoid grain products. A lower consumption of large quantities of grain such as pizza, pasta and bread can already reduce the symptoms of wheat sensitivity in some sufferers. Since there are currently no blood markers to identify the disease, diagnosis can only be made using an elimination process. If neither celiac disease nor wheat allergy can be detected despite typical symptoms, wheat sensitivity can be assumed. Prof. Schuppan's working group is currently working on a detection test in blood.

Some scientists point out that a nocebo effect can also occur in connection with foods containing wheat. This means that people who are allegedly affected expect a negative effect after consuming certain foods and this then occurs. In the meantime, however, sufficient studies indicate the actual presence of wheat sensitivity. However, further clinical studies must be carried out to explain the exact mechanisms of action.

It is usually unnecessary to dispense with wheat

For healthy people, it is unnecessary to do without cereal products containing gluten or anything that contains wheat. The misconception that a gluten-free or wheat-free diet helps you lose weight, is healthier and looks younger is a fad from the Anglo-American region, which, like the books cited above, does not stand up to any scientific justification. Manufacturers in particular benefit from the expensive gluten-free special products when the clinical picture is unclear. Their increasing consumption also makes it difficult to diagnose celiac disease or wheat allergy. Because in celiac disease, the antibody tests only work if there is enough gluten in the food. Anyone who thinks they cannot tolerate wheat or grain should definitely see a doctor in order to diagnose a possible disease.