Why did God create the universe 1 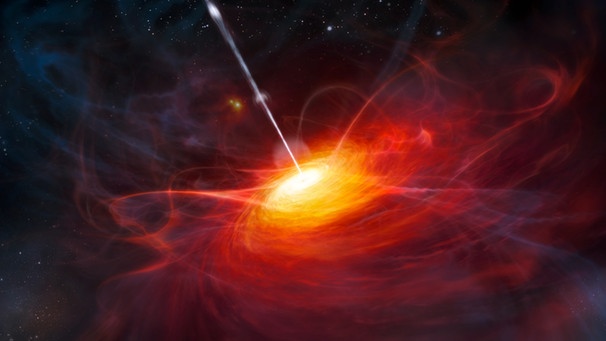 The Bible explains the creation story as an act of God performed in six days:

"In the beginning God created heaven and earth, but the earth was desolate and confused. God said: Let there be light and there was light. It was evening and there was morning."

So it is in the first book of Moses, the Genesis

In the USA in particular, many devout Christians, the so-called creationists, believe that this is exactly how the earth came into being. Many natural scientists, on the other hand, see the formation of the universe and thus also of the earth as a process that has lasted at least 14 billion years since the Big Bang. How do these two theories fit together? Perhaps the contrasts between the two schools of thought are not as great as they seem at first glance. Some scientists, as well as theologians, believe: We need a new story of creation.

Cycle of death and rebirth

Many cosmologists today believe that the universe did indeed arise out of nowhere. It all began with a huge Big Bang 14 to 20 billion years ago, as a result of which space and time, matter and the laws of nature were formed. In the first moments afterwards there were judgments like quarks, electrons, protons, muons, photons, neutrons and their antiparticles. But hardly ever formed, a large part of the particles was destroyed again by the same gigantic forces, as matter and antimatter annihilated each other. Only one billionth of the original particles remained. The first atoms developed from them. A billion years after the Big Bang, the universe had slowly cooled. The first hydrogen and helium atoms were formed. They first formed into cosmic clouds and finally into galaxies like our Milky Way with many billions of stars. But the stars also passed and continue to pass until today. They explode in a so-called supernova, dissolve and form new clouds, from which new stars eventually emerge. Everything, it seems, is subject to an eternal cycle of birth, death and new birth.

Supernovae: We are "children of the stars"

Many astrophysicists are convinced that the universe, our earth and ultimately we humans would not exist in our present form without this constant change, without the changes that keep bringing out new things. In our Milky Way a giant star developed five billion years after the Big Bang, which the physicist Brian Swimme and the theologian Thomas Berry Tiamat call. According to this theory, after three billion years, the star broke apart in a huge explosion, a supernova, and in turn created important elements for our earth through the resulting gigantic heat: carbon, oxygen and other "heavy" elements were formed from hydrogen and helium such as tungsten, copper, silicon, silver, magnesium or cadmium. Scientists say today that our earth and we humans are made up of 92 percent stardust. (Another theory is that the earth only rotates because a rotating primordial cloud, from which our solar system was formed, has condensed and passed its angular momentum on to the planets. The impetus for condensation was possibly the explosion of a nearby supernova.)

Seeing creation as a great miracle - with knowledge and amazement

For all of this to happen, a great many events had to come together, say researchers such as the astrophysicist Harald Lesch. Parts of the universe continue to form up to this day and life is always creating itself out of itself. Scientists such as the physicist and philosopher Fritjof Capra call this "do-it-yourself" autopoiesis (from the Greek for "auto" (self) and "poiese" " (do)). So heaven and earth may not literally come into being in six days. But our cosmos is still a miracle, as many physicists, theologians and philosophers ultimately agree on. Perhaps there is something spiritual behind all these events after all, something like a creator god. In any case, humans cannot be explained without explaining the stars, and they fit perfectly into the structure of the universe. We humans are only part of the universe, a tiny speck of dust on the edge of one of billions of galaxies, say some Christians and natural scientists today unanimously. Therefore we have no choice but to look at the universe with astonishment as a miracle.