We appreciate comics over time 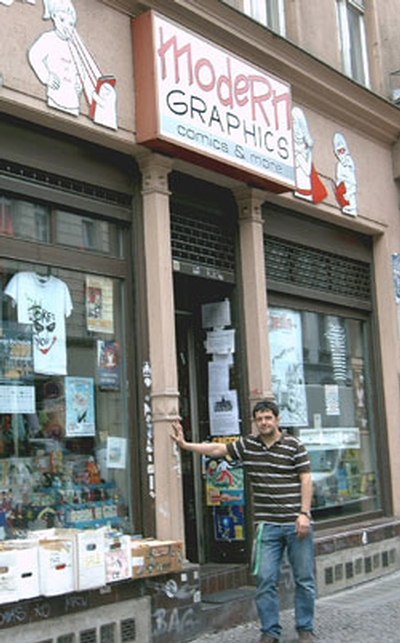 The comics shop in Berlin

You don't have to have entered one of the many shabby comic shops in this country to appreciate a well-stocked plot like Modern Graphics in Berlin. Because many shops, which in the worst case still operate as "comic and novel shops", resemble bachelor apartments, which are in different proportions untidy and confusing, or are delivered to the last corner with second-hand goods and thus rather repel the uninitiated. Plastic figures and trading card games often dominate the displays, or the notorious boxes in which superhero booklets kept in cling film eke out their existence as collectors' goods. The store in Kreuzberg's Oranienstrasse diagonally across from SO36 (not to be confused with the store of the same name that went bankrupt a few years ago) is now a pleasant counter-example: it offers a wide range of products for friends of Franco-Belgian albums, superhero and manga fans as much as for casual and graphic novel readers. Despite all the hustle and bustle, the shop is inviting and friendly, as is the advice. A specialist shop, not just for trade visitors. There is also a branch in the Europacenter, but the main store is the more worthwhile visit. I retired to the back of the headquarters with owner Micha Wiessler to talk about the history of the store, trends and market constraints and great comics.

How do you get, as a Freiburg resident, to open a comic book store in Berlin?

By being interested in it from the bottom of your soul. And by studying in Pforzheim with an old friend who is a trader by nature, dropping out of his studies, becoming a comic importer, and doing it pretty quickly, and then telling yourself that you don't live in the corner there like to stay, but would rather go to Berlin. I already knew Kai from school and together we moved to Pforzheim and later to Berlin. In addition, I had a girlfriend here at the time, so one thing led to another and we thought: The store will be “the next big thing”. We opened in 1991.

Has it always been that big or has it grown over time?

We were in these rooms from the start, so yes. But we've tried different concepts over time. There were other ideas and the comic spirit of the eighties was blowing. There were a lot more albums and it was made for classier and more chic. There were many more portfolios and originals to buy. In the back room there were even two or three exhibitions: a small one with Will Eisner and one with Daan Jippes, a Dutch Disney artist. My partner at the time, Michael Beck, organized that, but we soon stopped doing it.

You just mentioned the 80s comic book spirit. Can you briefly explain what is meant by that?

At the time there was an insane fixation on albums, i.e. the album format. Even American superhero comics were blown up to size. For those times, these comics were expensive compared to what is out there today, but again, ridiculously cheap. At the time, Swaarte and the entire Ligne Claire and Loustal, Bilal set the tone. Expensive portfolios were also in vogue. And neither the artists nor such exclusive products are of interest to the publishers today.

And your concept was different, you were interested in other things ...

We noticed very quickly here that you can't drive both tracks: a demanding, quite classy one with the Franco-Belgian albums, for example, and on the other hand one with the American mainstream comics. It just doesn't work, the audience is too different for that. You don't just have to choose one, but it is very important to have a focus. At the same time as we started here, my taste has also shifted to the more alternative corner. At the beginning of the 90s there was the wave of many autobiographical comics, people like Dan Clowes, and publishers like Drawn & Quartely or here in Berlin Reprodukt, which was also starting at that time. That's how I got to know, for example, “Love and Rockets”, something that didn't exist here before. That was an important development for us in the store and also for me personally as a reader. In contrast to many of our fellow dealers, we were fortunate from the start that the audience was there too. The location has always been very important to us. People were open to it, and it was very unusual at the time for so many women to go into a comic book store.

What is still not necessarily normal today ...

Here already. As I said, this is due to the location, but also because our program has always addressed women. A lot has changed over the years: The features section discusses many comics, overall they are much more accepted and many have realized that there are comics for every taste. For educated women too. Julie Doucet did a lot for us with her notebooks and books.

Of course, there is an imbalance between what takes up a lot of space and what makes a lot of sales. If you were to organize our shop in a purely professional manner, you would certainly redesign a lot here. But this is a specialist retailer that doesn't always hang its flag according to the wind. Of course you are subject to trends to a certain extent, and that cannot be prevented. We have also made a good living from basketball, magic or other cards for a few years. But our focus is clearly on the comics, otherwise it just becomes too arbitrary. If there are areas that generate more sales or earnings, then you are happy and take it with you, but I've always said to myself that modern graphics has its direction and that has priority. This, in turn, is perceived that way and benefits us. You can't just align your program with the current trend. There are traders who do that, but they could also sell fruit. I don't have to pretend for the money you earn with a shop like this, because having fun at work is too important to me for that.

What do you think makes a good comic?

First of all, it has to be a good story, which unfortunately is too often neglected. The problem is that there are a lot of good draftsmen but not that many good writers. The other way around, the best story is boring if the drawings don't go with it. For me it doesn't have to be breathtaking drawings, but they have to convey the story well.

And what makes a comic that sells well?

Only the gods know that, haha. Quality pays off, of course, but not exclusively. Things like trends or hype play a role here. Some comics sell well just because Obama is on the cover. We'd rather not talk about the content. There are also comics that sell well because the subject is interesting and new and that interests an audience that has not yet read very much into the subject. Marjane Satrapi's “Persepolis” is such an example, it is our bestseller. Sometimes the local connection is also important, like here in Berlin with “Didi & Stulle”, it always goes well. But: you can judge it afterwards, nobody can say beforehand what will go well.

What most of them noticed outside of the comics scene was the huge success of Japanese comics. That just loses traction at a high level. Are there any signs of what could become a new trend?

Manga was already very big and is still an integral part of our program. The special thing about them was or is that they were not only available specifically in comic book stores. The publishers have massively pushed into the book trade and it has apparently been well received. So I can't comment on the real state of affairs with Manga, you have to ask the publishers. In our case it hardly seems less to me, only that it is spread over more titles. The readers seem to specialize and there will be quite a few who follow things directly on the internet.

Now everyone is talking about "graphic novels" at the moment. Does that also affect Modern Graphics?

As I said, this has always been an important part of our program. Unlike many other comic book shops, we've always attracted classic book readers here. At the moment it's going even better than it used to be, and some of the books are going very well. I'm really excited about this trend because it appeals to a non-comic audience as well. You don't have to know fifty years of Batman history to understand these books. Sometimes I hardly get through, how is a normal mortal supposed to do that? You don't have to be in comic book shops all your life to find a title that you really like.

For many years now you've been following what's going on in Germany in terms of comics. Can you briefly describe that from your point of view?

Today there are definitely better draftsmen than back then, because today many young draftsmen also work as illustrators. The inferior German copies of international models have never interested me and they haven't sold here either. There is still hardly any money to be made from drawing comics, only very few can do that. Most of them earn their living differently, be it through entertainer shows like Fil does.