What is information as communication 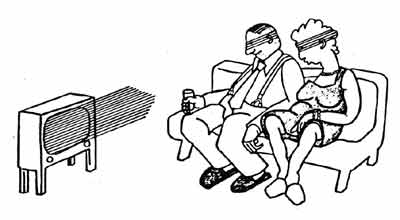 One distinguishes between communication and information.

Every human communication is a more complex Process between two or more individuals.

Every communication is to one situation bound. A situation is the total information that reaches a person at a given moment. This information comes from outside as well as from inside. The "what one talks about" is therefore always integrated into the situational continuum. in communication it is usually the case that there is a constant change of roles between sender and recipient.

A information on the other hand is a message that appears from one person to another only as the direction from the sender to the recipient. The recipient can indeed "reply" to an item of information, but the linguistic appearance of the answer will always be different from that of the information. E.g .: On one command there ("go to bed now ...") the person addressed will hardly ever respond with an order, but perhaps with a request, or with "obedience". The situational context also plays an important role in the information provided. ("Nothing is older than yesterday's newspaper".)

One can imagine that there are situational connections that make it appear sensible to let information become effective over the long term. E.g. as a traffic sign, as a learning book, as a border post, as a sanctuary, as a marked property, or even as a picture.

To do this, the information must be entrusted to a relatively solid material body, stone, metal, or at least paper. We call such a material body, which is supposed to "store" or "transport" information and was shaped accordingly, a medium or also a "channel". The term "channel" rather expresses the material character of this informative connection, that of the "medium" rather the informative character. (A television set that is not switched on would never be perceived as a medium.)

From the moment the broadcaster delivers its intention quasi released from his body, up to the moment when this is accepted again in the body of a recipient, we speak of medium. Something has to leave the body of the sender and somehow get to the body of the recipient. We can only imagine that this transport takes place in a material way. This is the "channel".

The canal is, so to speak, the truck that is loaded with goods and drives to a customer. The material structure of the truck remains largely unaffected by the type of goods it is transporting. However, the goods must be packaged appropriately in accordance with the transport conditions.

If a material system is linked with a message in such a way that it transports the message permanently and independently of the sender, then it is a so-called "indirect medium". Humans are therefore able to conserve material transports and materially bind information to channels.

Examples of such permanent channels: the book, the music book, the picture, the sculpture, the building, the CD-ROM, the record, the cassette, the tape, ... etc.

Channels are also required for direct communication: When you speak, the words are transmitted via (materially) moving air, the eye perceives changes in brightness and color (triggered by material changes), the tongue and nose need molecules in order to develop their sensory activity , and the skin also needs material influences in order to experience a sensory stimulus.

In addition to what they are supposed to transport, the canals also have their own quality that is also transported. (With a fully occupied car, 70% of the energy is used to transport the car itself ...) You usually hardly notice this quality, but it is still very decisive. We call this quality the "autonomy of the medium".

An indirect medium cannot store the entirety of the situation-related information, but only a certain "segment", a limited amount. This amount depends on the nature of the material system. Each channel thus has its internal law; A piece of wood can be entrusted with other information than, for example, a tape or a canvas.

When the sender entrusts his intentions to a material system, he will certainly choose the medium that best suits his purposes. But it can also happen that all material systems that are available to him can only express a part of what he actually wants to "say". Then there are gaps in information that can only be compensated by other types of information, e.g. good knowledge of the person of the sender or the situational reference in which the statement is "to be understood".

In the case of an indirect medium, an additional complication for the recipient is that he is always aware of the situation he is currently experiencing, which of course the sender could not have in view at all. (Just think of pictures that were painted many years ago.) This leads the transmitter to couple its own situational context with the information. This is called "projection".

Advantages of the indirect medium

The relative "importance" that the indirect medium (e.g. a book) can acquire can be derived from the following reasons, among others:

It is permanent. As a result, it can be received over and over again. "It is imprinted".

It is context independent. As a result, it has a greater "truth content", it is "universally valid".

It is "easy"- compared to the complex" reality "of the constantly changing situation.

As a material structure, it is already through human thought preformed. Therefore it is easier to understand, it "makes sense".

In order for a material system to become a carrier of information at all, it must be shaped. Shape is a crucial category in conveying messages.

The (arbitrary) material system that is supposed to serve for the transmission of information (wood, smoke, paper and pencil, water, skin, hair, flowers, and everything else one can imagine) can be given in consideration of the chemical-physical properties this element can be shaped in a peculiar way. For example, water can be shaped into fountains and drip concerts, wood into carvings or sculptures, or simply a signpost, smoke can be used to convey smoke signals, etc.

Now every material system already has a shape of its own, which is given for the natural form of being of this material. The natural appearance of the material is known through experience. The "formulation" becomes a sign if a communicative purpose is clearly pursued with it, i.e. a human intention can be assumed behind it. The material system is changed by the action of a human, purposeful activity. The purpose of this change in a sign is communicative intent.

The recipient must now be able to identify the perceptible formulation of the material system as the carrier material for a message. this is only possible withlearn. There must be conventions that make the formulation tangible or recognizable in the sense of the intention. That is the basic principle of every form of language.

If the change / formulation is recognizable but not interpretable, i.e. if the recipient cannot attach any importance to the formulation, it is a signal. A signal is also an indication of an intervention in the "normal" (i.e. physical / chemical self-evident) structure of a material system. But one cannot see what causes and reasons for this change exist. Often you don't know who made these changes.

If the cause is based on the interaction of natural (known) phenomena, then it is a question of "signs".

The "railway signal" of colloquial language is therefore a communication-theoretical one character. The dark approaching clouds are Signs maybe for a thunderstorm. The radio waves coming from space are Signals.

Without language there is no information and no communication. There are many different forms of language: winking, putting on makeup, dancing, caressing, laughing, facial expressions, gestures, fashion, architecture, sculpture, books, letters, images, opera, ballet, spoken language , the cinema, the concert, the car race, etc.

But there are also languages ​​that you don't have to learn, such as facial expressions. These are then "primary languages" in contrast to the "cultural languages" that can be learned.

So it happens that you can still "understand" people abroad, since communication is possible over long distances using the primary languages.