How is Joko Widodo personally

After more than a month, the result is official: Indonesian President Joko Widodo (Jokowi) has won a second term. The government coalition was also confirmed in parliament.

For the first time in Indonesia's history, mayor, parliament and presidential elections took place simultaneously in April. The logistical challenge was immense. On April 17th, 2019, the political fortunes of the country were decided by over 190 million voters. The turnout was 82 percent. Nationwide, there were more than 20,000 offices for which around 245,000 candidates applied. 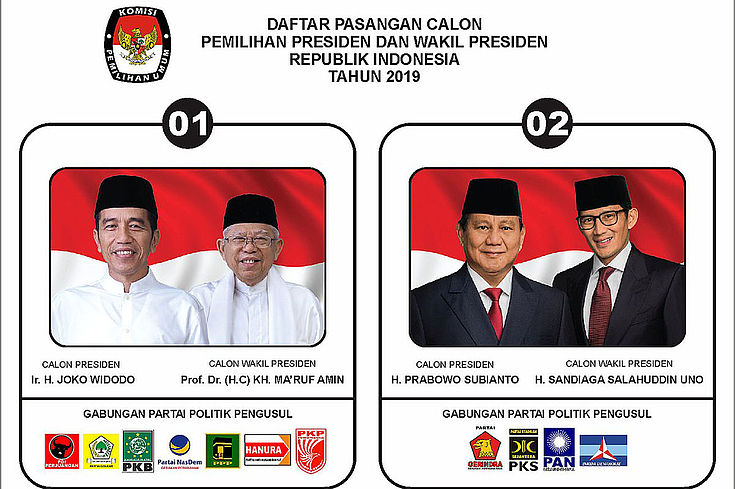 The parliamentary elections were also unsurprising. The nationalist parties were able to hold their own in comparison with the Islamic parties. Golkar, PDI-P, Gerindra, Partai Demokrat and NasDem together received around 60% of the vote. The Islamic parties with the Party of National Awakening (PKB), the Party of Social Welfare (PKS), the Party of the National Movement (PAN) and the Party of National Development (PPP) won almost 30% of the vote. 10% went to smaller parties, which missed the entry into parliament due to the 4% hurdle. The balance of power has not changed significantly since the last elections. However, the new Vice President Ma’ruf Amin, an Islamic-conservative cleric, could set exciting impulses in domestic politics. The planning ministry has already announced that it will draw up a 5-year plan based on the so-called Sharia economy. In the past, Ma’ruf Amin has also positioned himself very clearly on issues such as sexual self-determination or freedom of expression. In this respect, an increasing focus on religious issues in Indonesian legislation is entirely possible.

However, it cannot be assumed that President Jokowi will fundamentally change his domestically relatively successful course. With the help of the military and the police, President Jokowi will maintain the tough course in the fight against terrorism in order to strengthen his power base. Both before and after the elections, numerous terror suspects were arrested and accused of being close to the so-called Islamic State and of planning attacks against state institutions. In drug policy, too, the government is likely to continue its tough stance, which is popular with the population. This also applies to foreigners who face the death penalty for proven drug smuggling.