The mass of the neutrino is limited

Ghost particles on the “scales”: Physicists have succeeded in narrowing down the mass of the enigmatic neutrinos. With the help of the KATRIN experiment, they narrowed the mass range of these elementary particles by half. Accordingly, the neutrinos must be at least 500,000 times lighter than an electron. Knowing about the neutrino mass could help clarify what dark matter is made of and whether there is any physics beyond the Standard Model.

Neutrinos are among the most common elementary particles in the universe - and yet they are real "weirdos". Because they hardly interact with other matter and therefore race through our bodies billions of times without us noticing it. According to the standard model of particle physics, these “ghost particles” were long considered to be massless. But then physicists discovered that there are different types of neutrinos that can transform into one another - and that the particles must very well have a low mass.

But what is the mass of a neutrino? Nobody has been able to answer this question exactly. Until now, all that was known was that the particles must weigh something between 2 and 0.02 electron volts. "If you knew the mass of neutrinos, you would be able to answer fundamental questions in cosmology, astrophysics and particle physics," explains Hamish Robertson of the University of Washington. 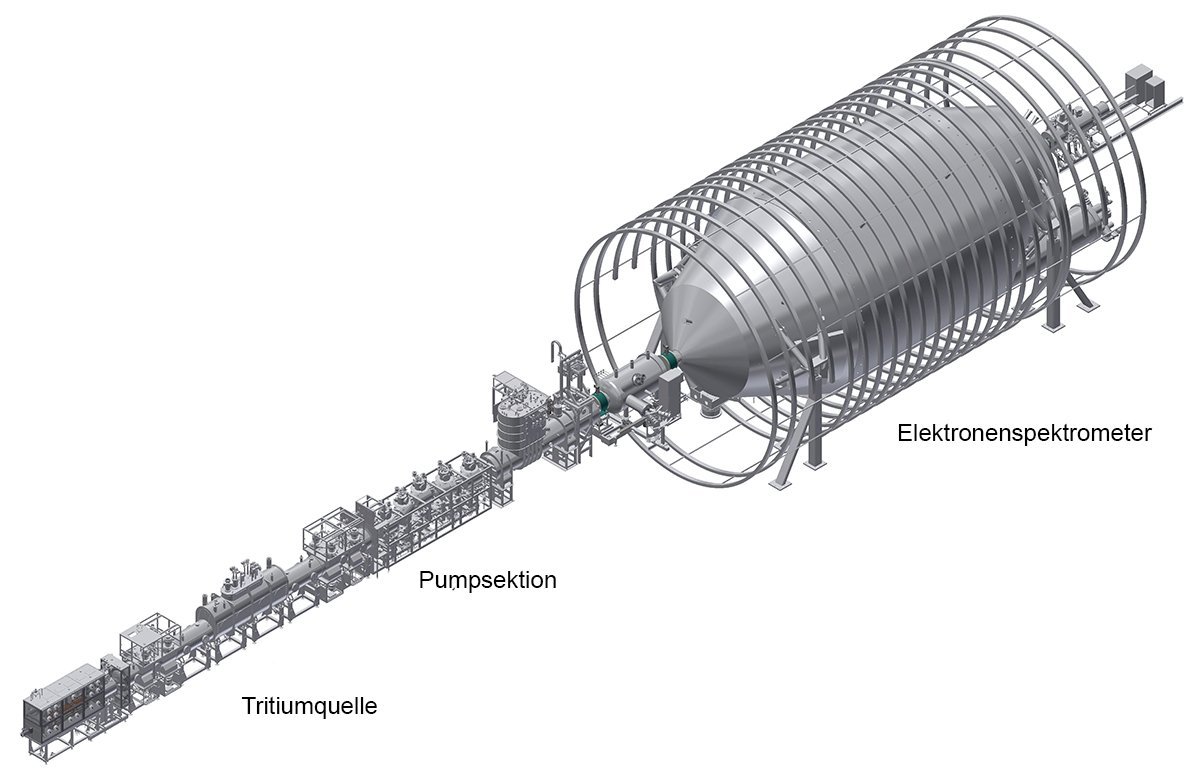 Structure of the KATRIN experiment at a glance. © Steffen Lichter / KIT

A “balance” for the ghost particles

The problem: You can't just put a neutrino on a scale. That is why physicists from seven countries launched the KATRIN experiment at the Karlsruhe Institute of Technology. This system enables the mass of neutrinos to be determined indirectly. For this purpose, radioactive tritium gas is used that releases an electron and a neutrino with a total energy of 18,600 electron volts when the beta decays.

In some of these decays, however, the neutrino only receives the portion that roughly corresponds to its rest mass. Although KATRIN cannot directly capture and measure the neutrino, it can capture the electron, which combines all of the remaining energy. By determining how much energy is missing, the physicists can deduce the energy and - using Einstein's formula E = mc 2 - the mass of the neutrino.

That’s the theory. But would this also work in practice? This has now been shown by KATRIN's first few weeks of operation. After evaluating the first data from around two million electrons, the physicists were able to reduce the mass range of the neutrino by half. Accordingly, its mass must be below one electron volt. This means that a neutrino weighs at least 500,000 times less than an electron.

"The fact that, after a measurement campaign of just a few weeks, KATRIN already has the world's best sensitivity for the neutrino mass and improves the multi-year measurements of the previous experiments by a factor of two, shows the extremely high potential of our project," emphasize KATRIN spokesman Guido Drexlin from KIT and Christian Weinheimer from the University of Münster.

But that is only the beginning. In the near future, the KATRIN experiment is intended to limit the neutrino mass even further and thus to get closer and closer to the actual value. "Once we know this value, it will tell us so much," says Doe. This could help clarify whether there is perhaps an exotic fourth neutrino variant after all, whether these particles are behind dark matter and whether there are physical processes and phenomena beyond the Standard Model.