About 870 million years ago, two dead stars merged in a distant galaxy. The collision made the structure of space-time tremble like a hammer falling on an infinitely extended steel plate. The vibrations - physicists call them gravitational waves - spread in all directions.

Last Wednesday, August 14, 2019, they reached Earth. The wave train also passed three pairs of carefully calibrated lasers. They are part of special detectors that keep an eye out for the tiny vibrations of space-time. 21 seconds after receiving the suspicious signal, the measuring stations sent an alarm that made smartphones vibrate around the globe. 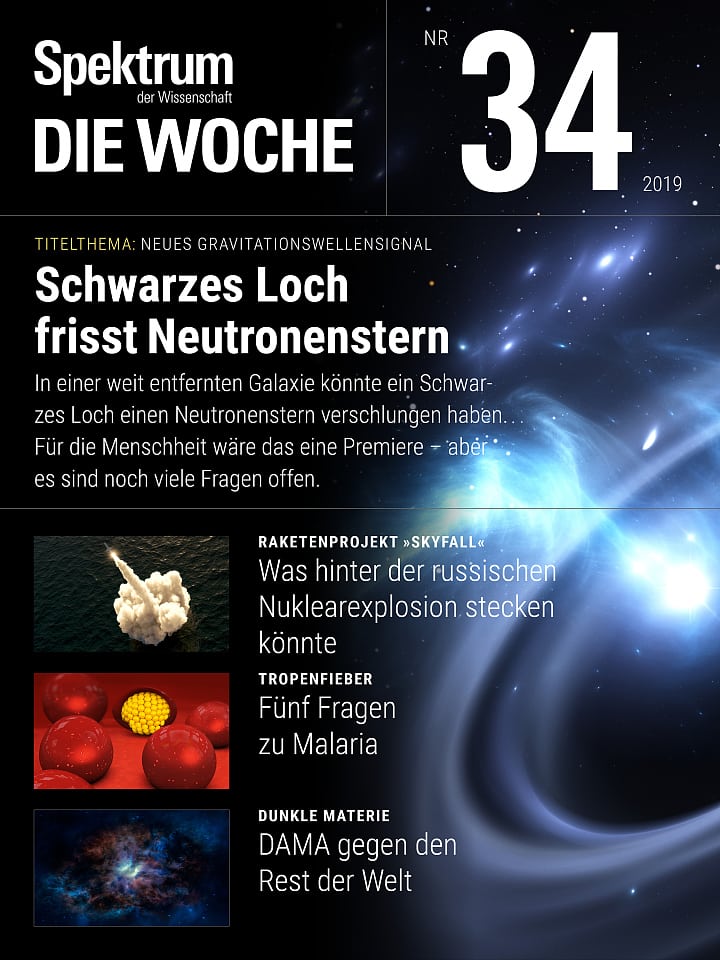 Almost four years after gravitational waves were first detected, such warnings have become commonplace. At that time, researchers had proven the collision of two black holes. Now the gravitational waves seem to have a different origin. "My jaw dropped when I saw the data," says Geoffrey Lovelace of California State University. He is a member of the Laser Interferometer Gravitational-Wave Observatory (LIGO) Scientific Collaboration, which watches over the pair of US detectors of the same name.

LIGO sensed the gravitational waves on August 14th at 21:11:18 (UTC), at the same time the smaller European counterpart Virgo struck out in Italy. According to a first, automatic rapid analysis, the waves came from two celestial bodies whose mass was unusually small. That made astronomers sit up and take notice. In the event of unusual gravitational wave signals, they immediately search the sky for a new source of electromagnetic radiation - the glowing debris of the massive crash. When two neutron stars collided in August 2017, the strategy led to success; the collision kept thousands of astronomers in suspense for weeks.

"It is the most promising case that we have come across so far"
(Geoffrey Lovelace, California State University)

Something else seems to be behind the gravitational waves of August 14, 2019: An initial analysis by the researchers classified the signal as a collision between a black hole and a neutron star. It would be the first time that researchers could prove such a crash beyond any doubt.

If the analysis holds up, the event, called S190814bv, could even mark the beginning of a new chapter in astrophysics: Researchers hope that they will learn to understand Einstein's general theory of relativity, the death of stars and the behavior of matter under extreme conditions even better than before.