Have all samurai practiced paederasty

"Diogenes, tell me where in Greece can I find a good man?"
"A good man? Doesn't exist, but there are good boys in Sparta!" 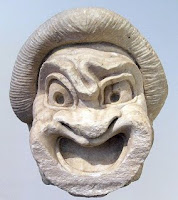 It is well known that Greeks idealized pederasty, although allusions do not occur in theater (as far as I know). It had its origins in Crete and from there it went to the mainland, especially Sparta, a gynocracy in which women were emancipated dragons who took part in political power games and pissed the men off so much that at some point they preferred to sleep together on campaigns than with them to share a bed for their wives.
With Alexander (gay) it spread all over the Middle East and actually has an influence there to this day because Musel also likes to suck bloody baby cocks and homosexuality is widespread there. Homosexuality was already pointed out in the Old Testament, so one can actually assume that this practice was also widespread outside of Greece.
It was also common in Rome, although they considered themselves superior to the decadent Greeks, with Antinous reaching a kind of climax quite late. (long before the late Roman decadence) In Rome, unlike Athens, it was allowed to rape slaves, a practical consideration because perverts are less trouble if they can let off steam with groids.

In the European Middle Ages there was probably fornication between knights and squires, in any case I've seen pictures of knights and squires being burned for it.
With the Byzantines, everything that had no beard was considered an open hole and that's why all Orthodox have a beard and shaved Russians are really all fuckbois.

At the time of de Sade it was fashionable among the French nobility to enter into love affairs with castrati because its not gay when the balls don't touch and 180 days in Sodom paints a picture of a Europe that was not so brittle after all and was under abuse Aristocrats have been in vogue for generations.
Of course, this raises the question of when these pizzagate conspiracies have been running. In England and Australia, reports of orphans and outsiders go back to the 1950s, and when you talk to senior citizens you can see that the church had a bad reputation for pederasty well before the 1990s. Obviously, pedophilia is not a postmodern decline.

I've also heard that the Hitler Youth has been demoted as gay youth, but I can't find anything about that. I would assume that they were just Assmad socialists, but the Nazi aesthetic is pretty homoerotic and the SA had a dubious past in this regard, the shit is just steaming again with the boy scouts if someone knew something about it that interest.

After the "collapse" of the Soviet Union, the situation in Russia was as bad as it was after the civil war. Russia has always had problems with children being pushed onto the streets by their dysfunctional alcoholic families and in the 90s the money wasn't there to pack them in homes. Especially in shitholes like Leningrad there was the problem that western "tourists" took advantage of the situation to do things for 3.50 street children there. Pretty based actually, fuck the Russians and fuck their brood that will be in the T-14 in ten years' time. Alternatively, children were "adopted" and then abused in the West or they were abused by "photographers" on the spot, the Edathy case wasn't that long ago either. After communism, child porn is Russia's most important export.
Corrupt shithole police are of course involved and ironically it is the evil FBI that is the only one interested in their brood and wants to "save" them as if it were not the better option to be whore in the global pedophile ring instead of advocating for Crocodile in the Russian pampas to whore kek.

In Germany we had Helmut Kentler, children of well-known pederasts, because he thought this "love" would be the best therapy for children from broken families. Of course, customers had to share with him.
You also have to consider that in many European countries the age of consent is somewhere around 14, pedophilia has long been played down and tolerated here and that is a result of this green subversion. I consider this No Doer Become project to be a cryptopedia operation, because who has an interest in such people getting to know each other? All crimes get easier with accomplices.

At KiPo, it all started in magazines that were of course, surprisingly, printed in "progressive" left-wing countries like Denmark or Sweden or "liberal" globohomo countries like the Netherlands. The whole thing has formed a kind of Nordic triangle; In England the children were kidnapped from institutions, in Scandinavia everything was produced and everything was sold in Amsterdam. That still happens today.
Pädo servers are often localized in Germany because of the strict laws on server security / private ferry and in Oceania. If you hear about a bust again today, it's always like that in the Philippines, Australia or more recently in Korea. South Korea is a gynocracy, the Philippines is a shithole with drug problems, and Australia is a land of criminals and abused children. The English have sent annoying teenagers / children to Australia, or the children have been downright kidnapped from home and their parents lied to. The people to whom the children were entrusted (nuns, clergy, deans (((philanthropists)))) naturally took advantage of this and beat the children, forced them to work in the fields and raped them. Australia is full of such suckers that one actually wanted to deliver to the fauna and that are now annoying because of globalization, Australia is Bugman Island * 32, the Chinese should simply enslave the fucking island.

And this was about homosexuality, we don't even have to start with girls. It didn't matter to a Viking whether they were 18 or 8.

And what do we learn?
Sex conspiracies are not so absurd as they are the norm.
If one takes the content of life from a caste, all discipline is forfeited and the dark side of human nature is revealed.
If you assign positions of power to unworthy plebs, you cannot trust them and have to assume that they are somehow abusing their influence, be it subversion, corruption or just diddling.
The weak and helpless are always exploited, especially by manipulative do-gooders psychopaths, you and your child can trust a murderer more than a teacher.
Homo homini lupus, and maternal instinct is a meme.