Views of a physicist

No formula in modern physics, or physics in general, is as well known to the general public as Einstein's formula E = mc². You can find it on postage stamps, small children sometimes whisper it to you with knowing expressions on their faces, and sometimes it finds its way into the features section of a national newspaper. Many people well know that this formula has something to do with an equivalence of mass and energy and that this plays a major role in an atomic bomb and an atomic reactor. For many, this formula has become the epitome of modern physics with all its terrible possibilities and “secrets”, and a commenter on one of my blog articles even went so far as to say that “Einstein's formula E = mc² the complexity of the universe compressed to five characters. "

Well, as profound as this formula is, the complexity of the universe is probably of a different caliber. You can see that from the fact that you can understand this formula quite well, while we probably only have a first inkling of the complexity of the universe. Einstein published this formula in 1905; that was the “miracle year” in which Einstein published five papers, all of which brought great advances in various branches of physics and which today mark the turning point between classical and modern physics. The concept of energy hadn't been introduced into physics that long at that time. It has been observed that certain quantities always retain the same value when moving, and that a certain “agent” called “force” is somehow retained when generating heat. But it was only about 50 years ago that Hermann von Helmholtz was able to show in the essay “On the Preservation of Force” for various physical processes that there is a quantity that always remains the same in number, regardless of whether it is in Form of movement, heat or electrical voltages and currents occurs and must therefore be calculated differently in each case. However, since this was not a quantity of the Newtonian force type, it had to be given a new name and the suggestion to call this quantity energy was soon generally accepted.

The mass in the theory of relativity
So Einstein came in 1905 in his three-page work “Does the inertia of a body depend on its energy content?” to the conclusion: “Gives a body the energy L. in the form of radiation, its mass is reduced by L / c². It is irrelevant here that the energy withdrawn from the body is converted into radiation energy, [...]. The mass of a body is a measure of its energy content ”. (With c is always referred to as the speed of light in a vacuum.) I do not want to repeat Einstein's considerations here, which led him to this statement. Today, after the establishment of the special theory of relativity, another justification is obvious, which immediately provides a completely different view of the concept of mass.
The key to this point of view is the formula (mc²) ² = E² - (pc) ²which follows freely from the formalism of the theory of relativity. Thereby means E. the energy of a body, p his impulse and m initially only a quantity that is independent of the reference system from which an observer measures energy and momentum. But if you use this formula to calculate the energy for a body, at speeds that are very small compared to the speed of light c are, then one is led to the fact that now m means exactly the mass of Newtonian physics. Thus, we can refer to this quantity on the left side of the formula as mass in the special theory of relativity, but we have to reckon with the fact that new properties of mass will now also appear.

A new property of the crowd
First we consider the case that the body is at rest, i.e. has zero momentum. Then it arises E = mc², that is exactly the famous formula, and we see here that it is the resting energy that is meant in this much-cited formula, not the body's energy at all, because that is greater when the body has an impulse or a speed owns. The rest energy is therefore equivalent to the mass in the sense of the formula E = mc², or better said, the mass is in this sense equivalent to the rest energy, is a “measure of its energy content”. Only the rest energy can of course correspond to this energy content, since this, like the mass, should be independent of the reference system from which it is measured.
So this is a whole new property of the crowd. What follows from this property of being a measure of the energy content or the rest energy, among other things, I want to show now.

A particularly blatant case of non-additivity is the following: Let the two bodies be an electron and a positron (anti-electron) whose impulses are opposite, so that the total impulse disappears. The mass of this system is not equal to zero, because electrons like positrons have a mass. If these are dispersed in two photons, the total momentum and total energy do not change and thus the mass of the entire system remains the same. The system of two photons then has a rest energy or mass, although the constituents of the system, the photons themselves, have no mass. Decisive for the mass of an overall system is its rest energy; whether the constituents themselves are massive or not does not matter. Here we even have the extreme case that the constituents, the two photons, have no mass at all and the mass of the entire system is composed only of their electromagnetic energies, the photon energies.

Examples of the non-additivity of masses
That forms of energy can also contribute to the mass of a system in this way can also be clearly seen when a body is heated. As a result, the individual constituents receive on average a greater kinetic energy, the rest energy of the body increases and thus its mass, although the sum of the masses of the individual constituents remains the same. Of course, the relative increase in mass is so small that it cannot yet be measured, e.g. it is of the order of 10 high -12 at a temperature increase of 200 degrees Celsius of an iron, such as L.B. Okun did the math. What we call an increase in energy in the form of heat in Newtonian physics is here an increase in mass. This shows the equivalence of energy and mass.

On the other hand, if one compares the masses of the entire system with the sum of the masses of the constituents of an atom or atomic nucleus, one does not discover an increase in mass but a so-called mass defect, the mass of the entire system is smaller. The cohesion of these systems is brought about by an attractive force, namely by the electromagnetic or “strong” force. The hydrogen atom (consisting of a proton and an electron) or the deuteron (consisting of a proton and a neutron) are the simplest of such bonding states. The energy that has to be expended to separate such bond states into their constituents is called bond energy. Thus the rest energy of the atom or atomic nucleus results here as the sum of the rest energies of the constituents minus the binding energy.
In the case of the hydrogen atom, the rest energies of the proton and hydrogen atom are of the order of 10 high 9 eV. The inaccuracy with which these rest energies or masses can be determined is of the order of 80-100 eV. On the other hand, the binding energy can easily be calculated within the framework of quantum mechanics, every physics student learns this once. This results in about 13.6 eV for an electron in the ground state and is in the order of magnitude of the measurement uncertainty, so that so far one can only say that the balance is correct within the scope of the measurement errors.
In the case of atomic nuclei, the binding energy is much greater; the mass defect gives values ​​from 1 to around 8.5 MeV, based on a nucleon. With helium there is about 1.7 MeV per nucleon, with increasing atomic weight the binding energy per nucleon rises steeply, with atoms with 40 to 70 nucleons it reaches its highest values ​​of 8-8.5 MeV, only to decrease again somewhat; for uranium, for example, it is still 7.6 MeV. Since the mass of a nucleon is about 10 high 9 eV = 1000 MeV, the relative mass defect here is in the order of magnitude of 10 high -3 (instead of 10 high -8 as with the hydrogen atom or 10 high -12 for the relative increase in mass when the iron is heated).
An energy of 1 MeV corresponds to approximately 0.4 x 10 high -19 kWh, that is not much, but if now it is about 10 high Twenty-three hydrogen nuclei and neutrons fuse, and even one gram of mass would be converted into energy in the form of radiation, you would get 25 million kilowatt hours of energy. A fusion of atomic nuclei takes place constantly in our sun, yes, all stars get their radiation energy from such processes. The sun loses four million tons of matter every second.
On the other hand, energy in the form of radiation can be obtained from atoms with a very high atomic weight in the reverse process, i.e. H. in the splitting of the atomic nucleus. Since the fission products have higher binding energies, the sum of the masses of the fission products is now smaller than that of the starting nucleus, and the difference is converted into radiation. This applies all the more, the higher the atomic weight of the starting nucleus. Therefore z. B. uranium with an atomic weight of 235 is an important fissile material.

Remarks:
i) The reader, who has already read quite a bit on this topic, may have noticed that nowhere in the text do the words “relativistic mass” or “rest mass” appear. These terms are superfluous and at most lead to confusion. The concept of mass as an equivalent to rest energy is completely sufficient.
ii) The idea that one should be able to relate mass to an energy in some way was expressed even before Einstein. It was made clear that the acceleration of an electrically charged particle requires more energy than that of a neutral one: a moving charged particle corresponds to a current and this generates a magnetic field. A magnetic field now has an energy and this must therefore also be made available. Again it was Poincaré who came closest to the final result, he had already clearly stated that an energy must also be assigned to inertia. But only Einstein was able to concretise this idea, grasp it more generally and prepare it for review. 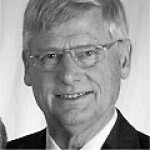 Josef Honerkamp was professor for theoretical physics for more than 30 years, first at the University of Bonn, then for many years at the University of Freiburg. He has worked in the fields of quantum field theory, statistical mechanics and stochastic dynamic systems and is the author of several text and non-fiction books. After his retirement in 2006, he would like to devote himself even more to interdisciplinary discussions. He is particularly interested in the respective self-image of a science, its methods as well as its basic starting points and questions and can report on the views a physicist comes to in view of the development of his subject. Overall, he sees himself today as a physicist and "really free writer".