Should we terraform Mars

On Mars, we could live in covered canyons

A Florida start-up is researching an unusual method to colonize Mars. It wants to construct panels from algae, which in turn can be turned into bioplastics. It wants to use it to build roofs for canyons on Mars - and ultimately terraform the planet.

Pretty red, really desolate and somehow monotonous, that's how Mars can be described quite well. He does not really welcome all the people who want to go there at some point in order to set up a second branch of humanity there. A little more green, so say psychologists, would be very good to make things easier for the coming settlers - and to prevent depressive moods. A small and quite young start-up from Tampa, Florida now believes it could do it. Because it not only wants to have developed a clever idea to effectively create living space on Mars, but also a natural, lively and green environment.

The settlers want to settle in the canyons that run through the surface of Mars like long veins. They would offer the best conditions to imitate an earth-like world. At least if you manage to turn them into closed habitats. And that's exactly why GrowMars founder Daniel Tompkins and his colleagues want to have found a solution: They want to combine algae cultivation and 3D printing.

“I live in Florida,” says Tompkins. "That is why I have always had an enthusiasm for natural resources, biology and agricultural science." In his local hackerspace, a place where tech and science enthusiasts meet and tackle projects together, he is and is repeatedly decried as "the plant guy" called to assist with relevant projects. Among them was a small project that aimed to create a bioreactor for growing algae: a device made up of water tanks and pumps that, with the controlled supply of nutrients, light and CO2, should enable aquatic plants to be grown as effectively as possible.

In fact, algae are pretty all-rounders. If processed correctly, they not only taste fantastic, but can also be transformed into a biodegradable but still robust plastic. Then it clicked: "I had the idea of ​​solar panel-like containers, which are, however, filled with algae - and whose contents you can make further panels in which you can grow more algae," Tompkins explains his train of thought. So it would be a flat bioreactor that could turn into an entire bioplastics factory through the use of robots and 3D printers. According to Tompkins, the simple structure and, above all, reproducibility make his idea perfect for colonizing Mars.

A greenhouse made of algae panels and bioplastics

It should not stop with the algae panels. The bioplastic could also be used to print transparent greenhouses that are armored for the harsh Mars weather, in which other plants could then also be grown: as a source of food and a producer of oxygen and thus breathable air. "Imagine: a meter of algae panels above and below - and the middle section functions as a greenhouse," continues Daniel Tompkins. This should guarantee ideal growth functionality - and at the same time a shield against the dangerous radiation on Mars, which can be blocked particularly well by water. 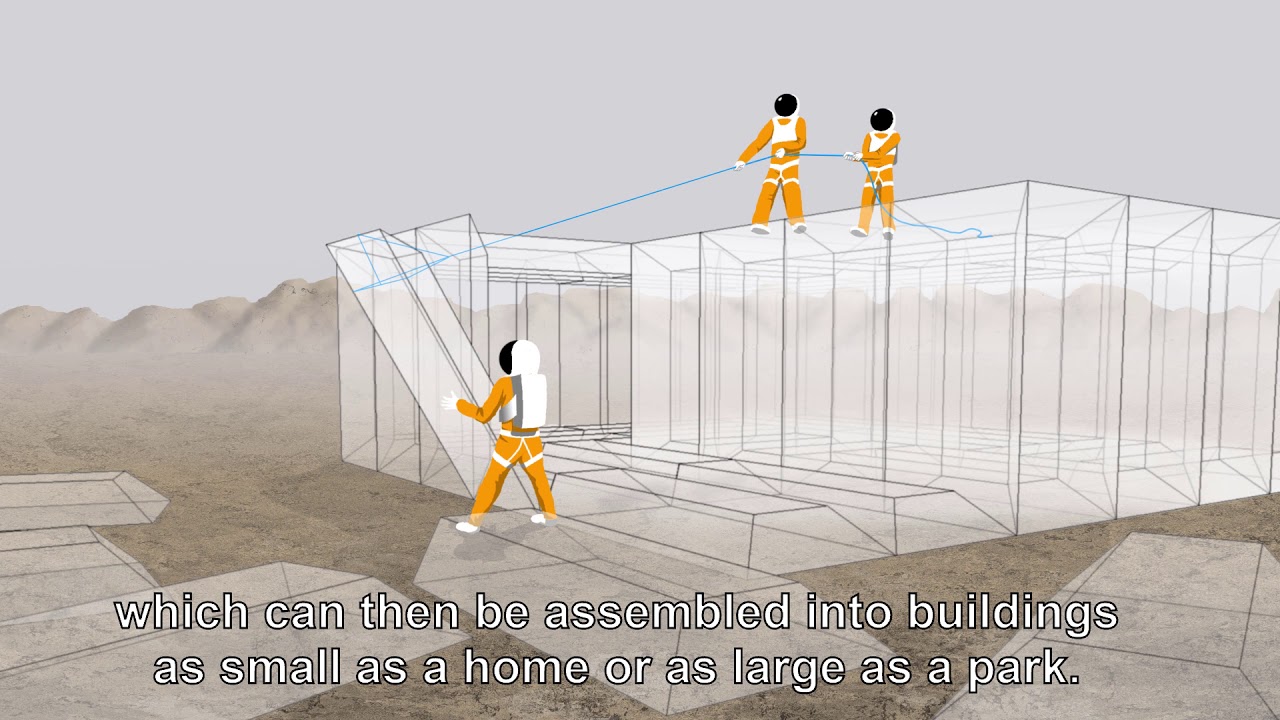 So why not use these plant factories as well? Namely as a continuous and spacious roof that is pulled over those canyons on Mars. They would span it like a pane of glass tinted by the algae mass. This would create very spacious habitats with a completely natural topography with very simple constructions. Which, at the same time, prevent the crampedness and claustrophobia that experts have always feared with previous plans for Mars bases. Because they can be as wide as a multi-lane motorway as well as small and large cities or even an entire country.

They could easily be used to create workplaces and homes, parks or even forests. Entire cities and megastructure projects that go far beyond the dimensions of a metropolis could be created, according to Tompkins - and in a fairly environmentally friendly and even energy-saving manner. Because the plants themselves would not only provide constantly new materials and oxygen, but also provide a certain basic warmth. Before such a first habitat can be constructed on Mars, problems would still have to be solved, such as the handling of perchlorates and other acidic salts in the Martian soil, which are not harmless to health. "But floor renovations are possible here and other solutions are under discussion," believes Tompkins.

An environmental factory for Mars?

In the long term, the greenhouses should not only serve as a basis for habitats, but also be used to function as a climate factory for Mars, as a producer of a human-friendly atmosphere. They should make terraforming possible - that is, the transformation of Mars into an Earth-like planet on which people can breathe and live. With the right conditions and enough raw material and production material for his algae panels and greenhouses, "a third of Mars can be terraformed within 84 years," claims Tompkins. Only 20 to 30 years after the start of terraforming, the first humans could exist almost independently of the earth and continue the transformation of the planet without help.

So far, however, these have only been visions and ideas. However, the small start-up is already in contact with several aerospace companies, says the founder. In Tony Muscatello, a former NASA chemist who is researching the transformation of Mars into a second earth has been won as a supporter. The company also wants to approach the European space agency. But at the moment it is mostly about spreading the idea and finding experts who deal with its feasibility.

But of course you need money to prove it - and that's what the start-up is currently trying to find on Kickstarter. The aim is to construct a first large prototype of the algae bioreactor, which supporters can then use a 3D printer to reproduce in various sizes. If the necessary money comes together - around 400,000 euros - a finished device could be ready in six months. That could show whether the concept works. Two to three years later, the GrowMars founder is convinced that the technology would be ready for Mars.