What are the deadliest diseases

These are 10 of the most dangerous viruses in the world

1) The most dangerous virus that can affect a person is the Marburg virus. It is named after the small, idyllic town on the Lahn, which in no way describes the course of the disease. Very similar to the Ebola virus, those affected suffer severe febrile seizures and bleeding from the mucous membranes, skin and organs. 80 percent of those infected die.

2) The Ebola virus can occur in five different types, named after countries and regions in Africa: Zaire, Sudan, Tai Forest, Bundibugyo, Reston. The Zaire Ebola virus is the most dangerous with a death rate of 90 percent. It also infected people in Guinea, Sierra Leone and Liberia during an Ebola epidemic in 2013. Researchers believe that fruit bats brought the virus from Zaire to cities.

3) The Hanta virus describes a number of viruses. It bears the name of a river on which American soldiers first became infected with the virus in 1950 during the Korean War. Signs include lung disease, fever, and kidney failure.

4) Avian flu stirred panic for months. With a death rate of 70 percent, that's justified. But the real risk of being infected with the H5N1 virus is very low. Humans can only become infected through very close contact with poultry. Because of this, most cases of illness occur in Asia. There people and chickens often live together in a confined space.

5) A nurse in Nigeria was the first person to contract the Lassa virus. The virus, which is spread by rodents, is endemic, i.e. accumulated in a certain region in this case West Africa. It is currently rampant in Nigeria again. Researchers suspect that 15 percent of the rodents living there carry the virus. 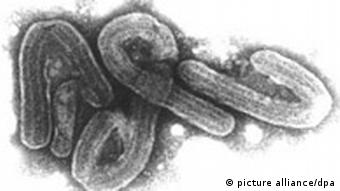 6) Patients suffering from Argentine hemorrhagic fever are infected with Junin virus. Those affected often suffer from conjunctivitis, sepsis and skin bleeding during the illness. The Turkish thing: the symptoms are unspecific, so that the disease is rarely recognized by those affected.

7) The Crimean-Congo fever virus is transmitted by tick bites and shows a similar course of disease in infected people as with the Ebola and Marburg viruses. In the first few days of infection, pin-sized bleeding occurs in the face, mouth and the lining of the throat.

8) The Machupo virus is also called "black typhus". The infection causes a severe fever, which is accompanied by profuse bleeding. The course of the disease is very similar to that of the Junin virus infection. The virus can be transmitted from person to person; native rodents are often reservoirs.

9) In 1955, researchers found the KFD virus in a forest on the southwest coast of India. The pathogen causing Kyasanur forest fever is also transmitted by ticks. Reservoirs cannot be precisely determined, but researchers suspect that rats, birds and porcupines can all be hosts. An infected person suffers from severe fever, headache and muscle pain that can cause bleeding.

10) If you want to spend a vacation in tropical countries, you should find out about dengue fever. Dengue virus is the most common virus caused by mosquitoes and infects between 50 and 100 million people annually in popular holiday areas such as Thailand and India. Two billion people currently live in vulnerable dengue virus areas.