Snake book for children: What do snakes eat? 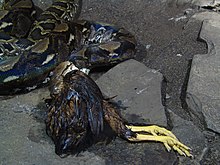 A reticulated python devours a chicken 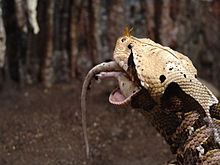 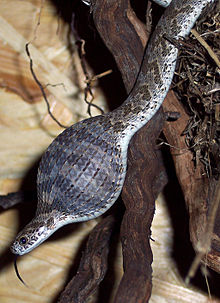 Here's what egg snakes are capable of. 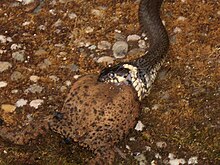 This grass snake is devouring a toad

Almost without exception, snakes are carnivores (technical term: carnivorous). Depending on the snake, insects, small mammals, birds, reptiles, amphibians and fish are consumed. Large, giant snakes can prey on mammals up to deer size! The prey is caught and killed using various strategies.

Strangler snakes are usually high seat hunters or ambush hunters, that is, they don't look for prey, but wait until the prey comes close. The attack on the prey animal begins with a bite that grabs the food animal. The snake then winds tightly around the prey in order to crush it. Each time the prey tries to escape, the snake squeezes tighter until the captured animal stops moving. It is then swallowed head first, with the snake swallowing the prey in one piece. It cannot chew its prey like us humans or many other animals.

Since the prey animals are usually larger than the snake itself, it has to be enormously flexible. In order to be able to devour your prey, the two halves of your lower jaw are dislocated. This allows it to open its mouth wide enough to accommodate all of its prey. Then she pushes her prey with lots of small teeth until she can swallow it.

Adders often look actively for their prey and sometimes hunt it down. The prey is grabbed by a quick bite, and if the prey is small enough it is devoured alive.

Venomous snakes are similar to giant snakes hide hunters. They wait for the prey to get close enough. When it does, the snake embarks on a lightning-quick, fatal bite that is so quick you couldn't see it. The venomous snake releases the victim and follows him until he is dead. Then it is devoured. With this tactic, they keep the risk of being injured by their prey as low as possible.

Some snakes are extraordinary food specialists that only feed on a certain type of food, to which they are, however, excellently adapted. One such snake is, for example, the egg snake, which only feeds on eggs. Since, like all other snakes, it can only swallow its prey in one piece, it expands its body until it can swallow the egg. Then she tenses your muscles so much that the egg is crushed. The inside of the egg is swallowed and the crushed shell is choked out.

There are a few other nutrition specialists, of which unfortunately only a part can be mentioned here: