Someone makes money off of Teespring

How Some Guys Make Millions of Dollars From Shirts On Facebook

Facebook Pages are no longer just fun meeting places or company pages: Resourceful marketers use the combination of offers such as Teespring and precise Facebook targeting and make millions with it

We often tell stories about people who earn a lot of money on the Internet without much effort. It's the same with Derek, a young American who answers all of our questions but prefers not to read his name on the internet. Because his business model can be copied so easily that you could start with it right away - but he doesn't want his market to be disputed. In eight months he made $ 600,000 in sales, with $ 180,000 in profit remaining. What did he need to do that? Facebook targeting and the Teespring t-shirt portal. We explain to you here how exactly Derek was able to earn so much money with it.

The young American traveled the world as a digital nomad last year and, as an entrepreneur, is always on the lookout for new business ideas. Then eight months ago he met an online marketer who showed him a platform with great potential: Teespring. Here everyone can design their own t-shirt and set the price and a sales target (number of shirts sold). If the campaign does not reach enough buyers, the T-shirt will not even be produced. In the case of successful campaigns, production, sale and dispatch then run entirely via the portal (so even more work is done here than with the German provider Spreadshirt). Anyone who can market their design cleverly quickly earns a lot of money: With a sales price of around 25 US dollars, Teespring calculates a profit of almost 7,000 US dollars - if you can sell 400 shirts. Teespring makes the difference to the total of 10,000 US dollars earned for its own service.

According to its own information, the portal sold six million T-shirts in the last year - since it was founded in 2012, it should have been over 12 million. According to Teespring, 20 customers have already earned over a million US dollars with shirt campaigns. Derek is not quite there yet, but with his sales of 600,000 US dollars he is still in the top group. In total, the young American has started over 2,000 Teespring campaigns. If you work out an average, this would add up to sales of US $ 300 per campaign, but this is mainly due to many failed attempts: "Every 50 campaigns there is one that makes between US $ 5,000 and US $ 10,000 in sales," he says Online Marketing Rock Stars. Sometimes the rest of them don't do anything. As I said, the effort is modest. It took Derek four hours to create the first campaign eight months ago, and now he even employs designers to bring more shirts to market. 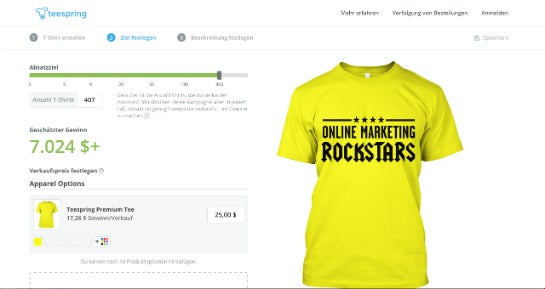 With a Teespring campaign, you can specify the price and the planned number of sales yourself. The more planned sales, the more money you will get per shirt.

Derek's most successful campaign to date generated sales of US $ 33,000, he wants to keep a low profile, copycats shouldn't get into the same industry, but the procedure should always be the same. The secret of success is called Facebook targeting. Many of Derek's competitors in the t-shirt business use Facebook Pages to drive sales. All you need is a page with a certain (niche) topic and then some design skill. Luke Kling (another Teespring professional), for example, manages some pages himself with over 250,000 likes, he matches each shirt to a topic on one of the pages and then markets it directly to the target group there. Typical topics: animals (dog fans, cat fans, camel fans), cooking and all other crazy hobbies in the world.

Derek no longer sees the topic of Facebook pages as a central topic: "You no longer need likes on a page to increase traffic, Facebook ads run by themselves," he tells us. Derek used to build a few pages with 10,000 to 40,000 fans to sell his designs, but that only helps to a limited extent. So today he designs a shirt on a specific topic, sets prices and markets it independently to the target group via Facebook advertising, which can be precisely targeted with tools such as the Power Editor. This is how his dog shirt gets into the timeline of dog lovers and the "mom is the best cook" shirt gets into affectionate teenagers. Teespring itself provides helpful tips for newcomers to the t-shirt industry. And the Swiss Reto Stuber is also successful with the business model and has now even developed an online course for beginners.

An example of a Teespring campaign on a Facebook page (“I Love My Chickens”).

Derek can start successful Teespring campaigns over and over again and thus win twice with the same product. This way of earning money is still relatively unknown in Germany, but it is not a problem here either. The French start-up Teezily offers the Teespring model in this country (it is very similar to the US model). According to their own information, the French have implemented over 90,000 shirt campaigns so far. But now Teespring is also pushing its way to Europe. At least the US start-up is already available in German. The company has so far collected over 50 million US dollars in investments - from Andreessen Horowitz, among others. Expansion is firmly planned, and an office has been set up in London. Incidentally, anyone who is now part of this trend could soon be trading in other things. The infrastructure for the sale of community products is already there at Teespring, and the founders are now considering expanding the product range. So look forward to the printed mugs and stickers, which should work well again on Facebook.