What is Beta Oxidation of Fatty Acids

The attempts of Knoop

In 1904, the German chemist F. Knoop made an interesting experiment which produced very decisive insights into the breakdown of fatty acids in the cells of mammals. A number of dogs were given fat to eat - not ordinary fat, but fat in which the fatty acids at the omega end were specially marked. Radioactive markings or markings with fluorescent dyes were not invented at the time, but chemical markings could already be used. Knoop used fatty acids, at the omega end of which an H atom was replaced by a benzene ring.

The experiments of F. Knoop

Knoop was then able to detect the breakdown products of the fatty acids in the urine of the dogs. In the example above in Figure 1, the number of fatty acid C atoms has been reduced from 6 to 2, in the example below from 5 to 1. That means that it has always been accurate four C atoms degraded. In the case of similarly prepared fatty acids with 7 and 8 carbon atoms, exactly six carbon atoms were always broken down, and so on.

Knoop's findings from these experiments can be formulated in one sentence: When fatty acids are broken down, the carbon atoms are always removed in groups of two.

The beta-oxidation "lightening" the fatty acid by two carbon atoms and thereby gaining a molecule of acetic acid, so to speak. As is so often the case in biochemistry, this process also takes place in several steps.

Oxidation of a fatty acid by FAD

In the first step of beta oxidation, the alpha and beta carbon atoms are oxidized by removing hydrogen (dehydrogenation). The coenzyme FAD acts as a hydrogen acceptor, which becomes FADH2 is reduced. This oxidation creates a trans- double bond.

This step is necessary because the enzyme that is responsible for the next step only contains fatty acids trans-Configuration as substrate recognizes, which is of course due to the structure of the active center of this enzyme (lock and key principle). 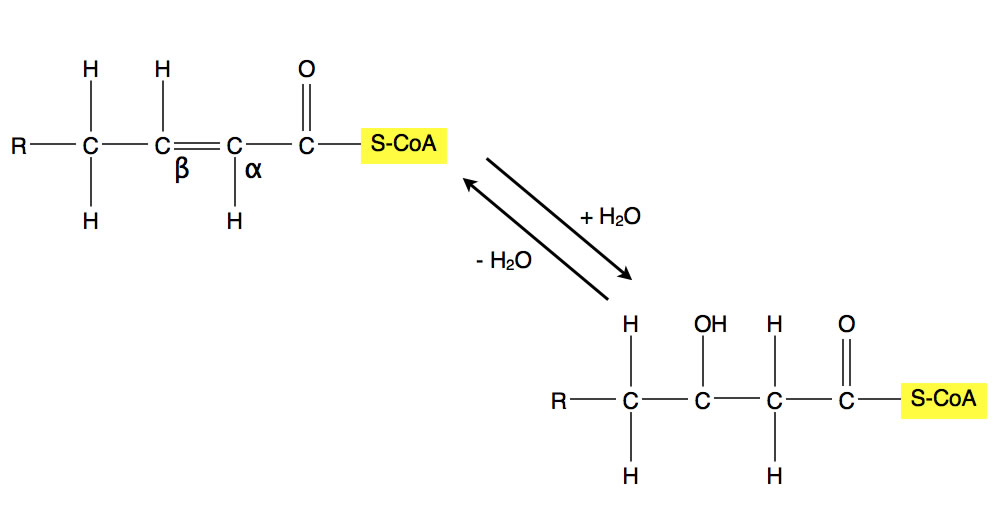 Addition of water to the new double bond

In the second step, a water molecule is added to the newly created double bond. The beta-carbon atom thus receives an OH group. Anyone who has a little knowledge of biochemistry already knows what comes next: The OH group is oxidized, so that a new carbonyl group is created.

Oxidation of the OH group

The reaction product now has two C = O groups: one in the former COOH group and one on the beta-carbon atom. If you look closely now, you can see an acetic acid molecule in the reaction product. For the people who don't see that yet, I've changed the above picture a bit:

Oxidation of the OH group

The acetyl group is basically an acetic acid residue. However, one should not confuse this residue with the negatively charged acetate ion: acetyl residue = CH3-C = O-; Acetate ion = CH3-COO-.

The fatty acid that is now twice oxidized (once by FAD, once by NAD+) now separates the acetyl group with the attached coenzyme A molecule:

Another CoA molecule is added and attaches to the remaining fatty acid, which is now shortened by two carbon atoms. 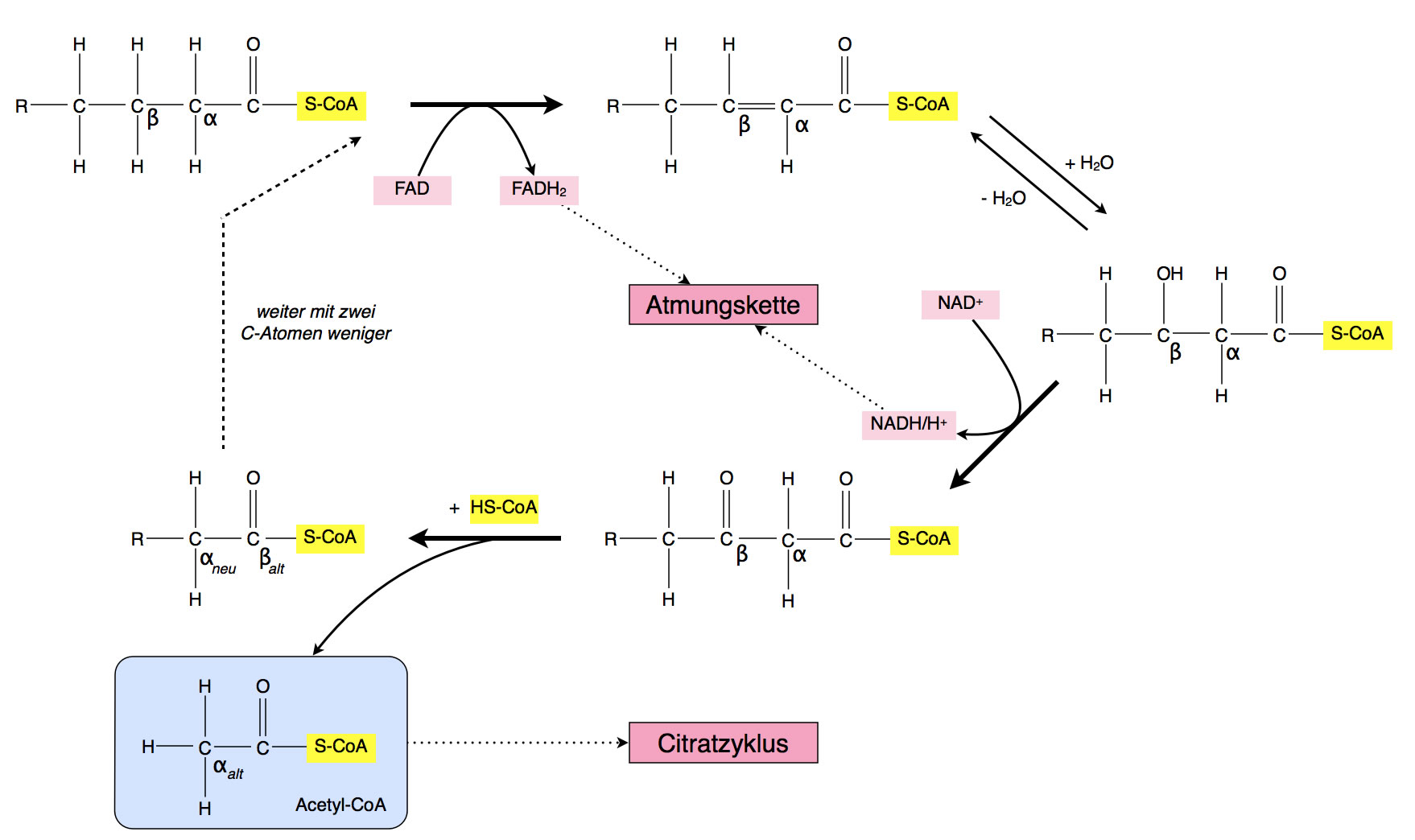 Here we see all four steps of beta-oxidation again in one summary. In the case of a fatty acid such as stearic acid with 18 carbon atoms, this beta-oxidation has to take place nine times before all of the fatty acid is broken down.

In the case of odd-numbered saturated fatty acids, acetyl-CoA is also formed from two carbon atoms. There is only a problem when the last three carbon atoms have to be broken down. This problem is solved by the fact that in the end it is not acetyl-CoA that is produced, but propionyl-CoA, i.e. a compound with one more carbon atom.

There are also problems with unsaturated fatty acids because the beta-oxidation enzymes cannot cope with the cis double bonds. These cis double bonds must first be converted into trans double bonds by further steps and further enzymes so that hydration can take place.

As can easily be seen in Figure 7, one FADH is produced per "round" of beta oxidation2- and a NADH / H+-Unit. So these are two reduction equivalents that can be fed directly into the respiratory chain of the mitochondria.

Not to be forgotten is acetyl-CoA, which is actually the main product of beta-oxidation. The acetyl-CoA can be fed directly into the citric acid cycle, where it is broken down into reduction equivalents, which then flow back into the respiratory chain.

In his book, Löffler set up the energy balance for the breakdown of palmitic acid and comes to the following result:

Complete oxidation of the palmitic acid (16 carbon atoms) produces 8 acetyl-CoA molecules. To do this, the beta oxidation has to be run through 7 times, with 7 FADH2 and 7 NADP / H+ arise.

If acetyl-CoA is fed into the citric acid cycle, reduction equivalents are also produced. For each acetyl-CoA, 12 ATP are then produced in the respiratory chain. With 8 molecules of acetyl-CoA, that's 96 ATP molecules.

It becomes interesting when you compare the energy yield of long-chain and short-chain fatty acids. A short-chain fatty acid with - let's say - 6 carbon atoms undergoes beta oxidation twice. This creates 3 acetyl-CoA molecules and 2 FADH2 and 2 NADP / H+, which are used in the respiratory chain to 10 ATP. The 3 acetyl-CoA molecules produce 36 ATP, together that's 46 ATP. From these 46 ATP, however, 2 ATP must be subtracted for the activation of the fatty acid. Of the 46 ATP gained, only 44 remain, that's 95.7%. On the other hand, when palmitic acid is broken down, 129 of the 131 ATP obtained remain, that is 98.5%.

The longer a fatty acid is, the cheaper it is for generating energy. This is because a fatty acid only needs to be activated once, regardless of how many carbon atoms it has[5].