How do I make my blog searchable

The search engine Spaactor from Bremen makes radio broadcasts and YouTube videos searchable. But there are also other smart start-ups. 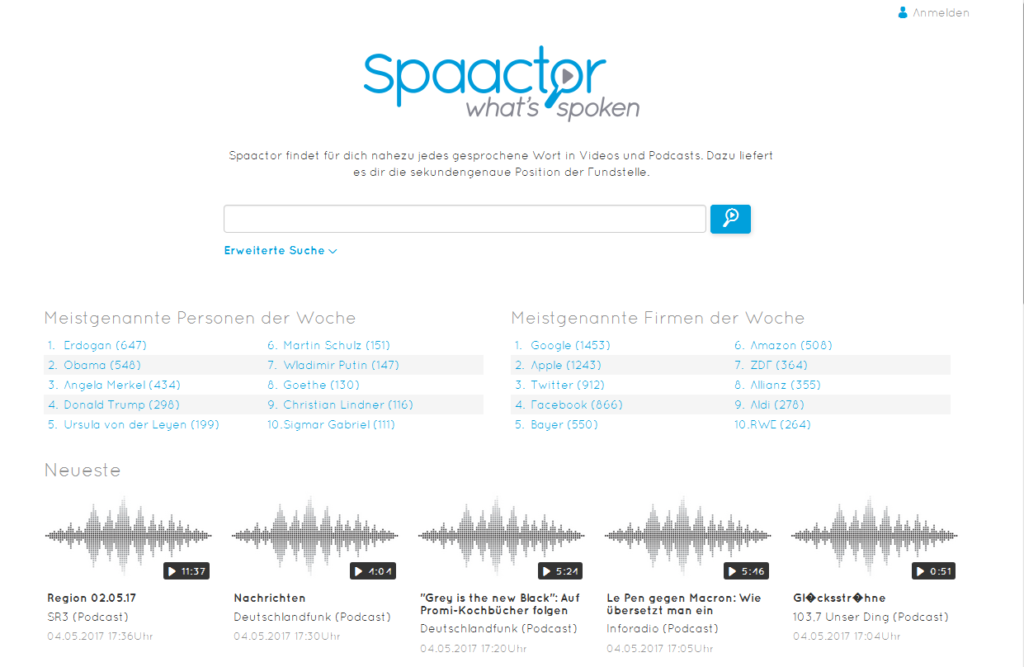 Suppose that on the way to work a program recently ran on the car radio about unmanned vehicles, the so-called drones. The show would have been interesting, so much so that one wanted to listen to it again - but what was the title? Or the name of the program? Or the transmitter? Difficult to remember something like this when you concentrate on driving a car. How good would a search engine be for spoken words in radio broadcasts, podcasts or videos. Christian Schrumpf and Thorsten Schoop have developed such a search engine that recognizes language and converts it into text and thus makes it searchable. They call it a spaactor, but hardly anyone knows their technology. The Germans have developed something that is not only unique to date, but could also change the way we consume media in the future.

With the increasing use of mobile devices such as smartphones or tablets and the - albeit slowly - improving mobile internet connection, videos are becoming more and more popular. In social networks like Facebook, they make up a large proportion of all shared content, and not only companies rely on them, but also advertisers. So it only makes sense to make videos and spoken words searchable. What sounds like a distant dream of the future is actually an old idea: In his diploma thesis at the Fraunhofer Institute, the computer scientist Schrumpf had already developed the idea, that was in 2004.

That was a year before Youtube was founded, video platforms on the Internet were anything but natural and the technology was not yet ready. Not to mention the legal framework: It was only with a ruling by the European Court of Justice in 2014, which allowed so-called video embedding, i.e. the integration of third-party content on one's own website, that Spaactor was able to found its own website and as a company .

The search engine jumps to the desired location

Because the highlight of the search engine is: It not only shows the podcasts or videos found, but also jumps directly to the point where the content you are looking for occurs. According to the entrepreneurs, the underlying speech recognition already has an accuracy of 80 to 85 percent. “At the Tagesschau it's almost 100 percent. They try hard, ”says Schoop. Dialects are still more difficult at the moment, or when people talk all over the place on talk shows. But that's what the founders are working on.

Spaactor is currently searching 250 channels, media libraries of public broadcasters as well as YouTube channels of football clubs or well-known YouTube stars. Users can make suggestions for other broadcasters, which the founders then review editorially. They want to keep offensive content that glorifies violence away from their platform. There are currently around 1 million documents in the database, and 2,000 to 3,000 are added every day. The algorithm pulls new content from the ARD media library every 15 minutes and makes it searchable. The founders are currently working on an English version of the search engine.

But they are still looking for investors, which is why Spaactor also had a stand in Hall 11 at the Cebit computer fair in Hanover. Together with around 400 other start-ups, the young company from Bremen presented itself at small stands in the forum called “Scale 11”, in which this newspaper is a media partner. The search for venture capitalists has now been completed. Schoop and Schrumpf are satisfied with the interest in their product. That was clearly noticeable during the week at CeBIT.

Spaactor currently earns money through advertisements, and the company also offers a paid search query especially for companies that want to monitor certain search terms over a longer period of time. It would also be conceivable for companies or parties to place video ads during election campaigns that are displayed above the normal search hits, similar to Google. Angela Merkel, for example, could have her party conference speech prominently placed if you look for her in Spaactor.

The prospects for the young company are bright, because the infrastructure for its technology is already in place. With Microsoft's Azure cloud in the background, the business model is also easily scalable, which means that Spaactor can quickly book the required storage space and servers for the search if interest increases significantly. And the company has the advantage of being first, but the competition never sleeps: “Google or Facebook could certainly develop something like that, but their priorities are obviously different at the moment,” says Schrumpf. It would cost a good 150,000 euros to develop such speech recognition software, says the computer scientist. And maybe the big companies from Silicon Valley will knock on the door at some point to buy Spaactor technology - it wouldn't be the first time something like this had happened to a start-up.

Of course, many of the young companies in Hall 11 were hoping for the rain of money from an exit. The range of ideas is wide and the interests of the visitors are fundamentally different. While some start-ups sit around on their own at their booth most of the time, waiting for someone to show interest in their app, at other booths, those interested come in groups straight away.

3D printing is getting cheaper - and faster

Like Triditive, a Spanish company that is presenting a new type of 3D printer. Mariel Diaz, founder and head of the company, is actually from Colombia, but she has been researching 3D printing at the University of Oviedo for some time. The printer, which can produce a good 1000 parts per week, costs a good 3,000 euros. The device is intended to fill a gap between industrial large-scale production and the gimmick of technology nerds who just want to experiment a little with 3D printing in order to build prototypes. “Nobody else prints like us,” says Diaz.

What many other start-ups do for this are apps, i.e. programs for smartphones. “Daily Dress” is one of those clothes that is supposed to recommend items of clothing for every day, individually tailored to the customer's wardrobe. The start-up advertises that women need at least 16 minutes every day to decide on an outfit. 40 percent of all clothing items of a woman are seldom or never worn. The self-learning algorithm of the start-up is intended to change that and, just like the mother used to put out her clothes - at least digitally. Or at least make a recommendation. The founding idea was awarded an innovation prize at CeBIT.

Recommendations are also made by “Drivo”, an app from Bremen that analyzes driving behavior in the car with the help of the sensors built into the smartphone and gives tips for a better driving style. For normal users, it should be an incentive to drive more consciously. The start-up wants to earn money with fleet management, i.e. convincing companies to monitor their drivers so that the cars remain in good condition for longer. The app just came out. Already at CeBIT it is clear how hard the fight for attention is. For “Drivo”, even more than for the other start-ups, a journey into the unknown follows.

This text appeared on March 26th in the Frankfurter Allgemeine Zeitung

You can use this search engine to crawl videos