What does the NEET indicator tell us?

NEET stands for not in employment, education or training and encompasses a category of young people who are neither integrated into the employment nor into the training system. In the first estimates for Austria (Bacher and Tamesberger 2011), the public debate revolved primarily around the topic of truancy, which did not do justice to the complex challenges. Now a recently published study shows the extent of the problem, causes and solution strategies.

Kai Biehl has already shown in detail the limits of the youth unemployment rate in this blog. Because of these weaknesses, international experts and political decision-makers also focus on the NEET indicator. This appears to be sensible, since considering the number of unemployed young people alone, the extent of the problem is underestimated. According to Eurostat, around 5.5 million young people in the European Union (EU 27) were unemployed in 2012, while the number of NEET young people was around 7.7 million. The difference is that the NEET indicator not only includes unemployed young people (available and actively looking for work), but also unemployed young people (either not available or / and not actively looking for a job) who are neither in employment, Education, are still in training or in further professional development. The figure below shows that these two concepts overlap. In Austria around 47% of NEET young people are looking for work and the majority (91.5%) of them can start working within the next two weeks. 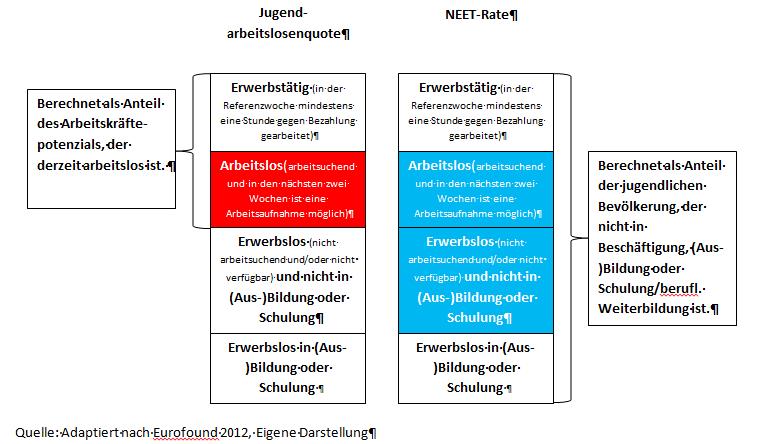 The second reason why it makes sense to use the NEET indicator is that the focus is on unemployed young people who may have an increased risk of permanent exclusion from the labor market. They should represent an important target group for labor market policy as well as reveal recruiting potential for companies.

This advantage also leads to the weaknesses of the indicator. Due to the broad definition, the concept brings together young people who have very different needs and problems. The NEET group in Austria is made up of young early school leavers (21% of all NEET young people), apprenticeship graduates in rural regions (20%) who presumably have difficulties in finding employment near their place of residence, and young people with Diseases (9%) together. There are also older unemployed people (18%) and school leavers in waiting position (10%), some of whom have already received a job or are waiting for military or community service. Two groups are formed by young mothers with caring responsibilities (around 23%). It can therefore not be assumed that all NEET young people are at risk of exclusion. On the other hand, the indicator does not cover all young people at risk of exclusion, as, for example, precariously employed young people are not taken into account. People who take up an hourly job would no longer belong to the NEET group.

On average between 2006 and 2011, around 78,000 young people between the ages of 16 and 24 were in a NEET situation. The number of NEET young people or the NEET rate is heavily dependent on the economy. The NEET rate in Austria was 7.8% in 2008 and rose to 9% and 9.1% in 2009 and 2010 due to the crisis. During the economic recovery in 2011, the NEET rate fell again 7.6%. The number of NEET young people, which was recorded in the study in accordance with the internationally customary procedure, must be assessed as the lower limit, since only young people in private households are taken into account here. NEET young people who are in institutional households such as youth homes or who are homeless have not yet been taken into account here.

Main cause of early school leaving

The disintegration of the employment and (training) education system, in the sense of NEET status, has diverse and complex causes. However, early school leaving could be identified as a main cause in both the quantitative and the qualitative study. Early school leavers are young people who do not have a school leaving certificate, have only completed a compulsory school or a one-year technical school (Berufsbildende Mittelschulen BMS) and are currently no longer in the education system. Slightly more than half of NEET young people (51.2% of all NEET young people) are early school leavers. Other explanatory factors are previous experiences of unemployment, illnesses and, in the case of young women, care responsibilities.

Even if Austria has a relatively low NEET rate in an international comparison, counter-strategies are indicated due to the individual fatefulness, the economic costs and above all due to the socio-political consequences. Among other things, reducing the proportion of early school leavers and increasing the labor market opportunities of early school leavers appear to be important goals. Measures to avoid early school leaving include a needs-based distribution of funds for school locations, the introduction of a comprehensive school, the expansion of all-day schools in an interlinked form and measures for regional networking of relevant actors (school, AMS, youth and social work, community, companies, NGOs, GKK , etc.) to recommend. The networks can also open up opportunities for young people to participate and make decisions. Active labor market policy can improve the labor market opportunities of disadvantaged groups. Due to the different problems and needs of NEET young people, measures are promising if they start with individual needs, work in relationships, are low-threshold, comprehensive and flexible. In order to reach those young people who avoid traditional institutions, concepts of outreach youth and social work are recommended. There is also a need for more jobs for young people with little education or with health problems. In general, measures to stimulate the economy have a lowering effect on the number of NEET young people. NEET young people particularly benefit from investments in social infrastructure. A significant expansion of childcare places would not only create direct and indirect employment opportunities (Buxbaum and Pirklbauer), but also make it easier for those affected to combine family and work.

The blog post appears in an adapted form in the newsletter of the Upper Austria social platform.

Further references, studies and media reports on the subject can be found on the homepage of the Institute for Social and Economic Sciences