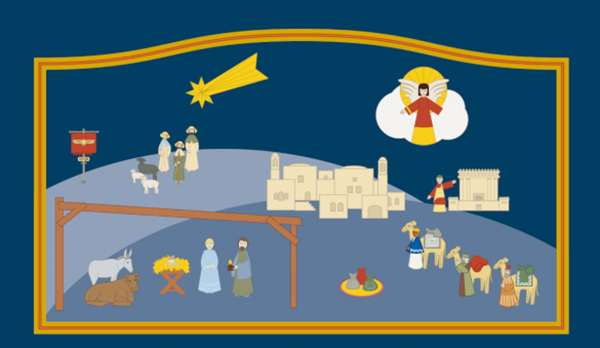 It's not difficult to let Christmas touch you. For who is not moved by what is said to have happened that night in a stable in Bethlehem: the birth of a child, the birth of Jesus Christ?

At the heart of the Christmas story is something deeply human; something that we have all experienced, experienced or celebrated at some point. With the birth of a child, Christmas is also a bit of everyday life, albeit a glorious, fulfilling, moving one. What is there to explain and interpret in great detail? The festival is what it is: a story of creation, the celebration of the birth of a new person. And with him everything starts all over again, everything will be new and nothing will be the same afterwards as it was before. There is nothing greater.

With every birth, the awareness of time also begins. Our age documents this meticulously and thus triggers different sensations in each of us, such as: Finally 18! But also: My God, already 80! But it is different with the birth of Jesus, because with it the calendar of all humanity begins. The fact that we describe our present with the year 2018 is due solely to the event in Bethlehem. Every chronological calculation we make has to do with the birth of Jesus. Our sense of time has its origin in Bethlehem; everything seems to start in the manger.

Given the circumstances that have been handed down, this is astonishing at first, because nothing in this story is really pompous. Joseph, a simple man, moves to Bethlehem with his heavily pregnant wife Maria of Nazareth. A disdainful administrative act makes this necessary: ​​a census, ordered by the Roman emperor Augustus. And because there is nowhere to be found a free inn that night, a stable with a crib becomes the place of birth. Just a temporary solution.

It doesn't get any smaller or more inconspicuous. A birth in the middle of the province and on the edge of the Roman Empire! A birth in barren, poor conditions. Hardly anyone takes any notice of it or asks about it. Chroniclers aren't there either. The evangelists Luke and Matthew - the two great narrators of Jesus - will not begin to write them until 40 years after the death of Jesus at the earliest. The Christmas story is a second-hand tradition. And it only appears to be worth telling when this wondrous life and work with death on the cross and resurrection gets its final meaning.

But it is precisely this birth that will make history, the history of faith to this day. The circumstances of the birth are already a message: It also tells of the fact that the lowest will be the highest and that the sacred occurs where it is not expected: in a stable - not in the center of worldly power, but actually in the middle in life.

What comes into the world with this birth is also simple, truthful at first: a person. That it is God's Son this time makes faith tangible with this night, in the truest sense of the word. We now have his face in front of our eyes, we can call him. With Jesus God comes among the people. This does not make faith worldly, but it does come into the world.

It could actually be an all-round beautiful story - with the star above the crib, the wise men from the Orient who pay homage to the child and give them gold, frankincense and myrrh. But the world does not give God's Son a particularly majestic reception. There is not even time to look forward to the small, large family happiness.

Finally, an angel of the Lord urges Mary and Joseph to flee. For King Herod learned of the birth of a king of the Jews; now he senses competition. And he reacts as cruelly and hysterically as those obsessed with power often react in such cases: He has all the newborns in Bethlehem killed - in the hope of eliminating the supposed adversary.

The idyll in the stable will come to an end quickly. The world shows its ugly, ruthless side. The only way to save life is to flee, and so the Holy Family must find safety in neighboring Egypt. There life waits in a lawless space.

What began as a history of salvation suddenly turns into a history of misfortune. It tells of an escape experience with which God's Son enters the world and which has determined our lives from time immemorial to this day. With the refugees from many crisis countries around the world, this has also been visible and tangible in us for a few years now.

The Christmas story is not the only testimony to this experience in the Bible, and it is especially not the first. The Bible is full of stories of migration, flight and displacement. None of them sanctify the refugee movements of our time. But what the Bible shows us is that migration in many forms and for many motives is the great human theme: At the beginning there is the expulsion of Adam and Eve from Paradise; Noah saves himself and his family on an ark; Finally, Moses will lead the people of the enslaved Israelites out of Egypt to the promised land, a journey that culminates in the experience: “The stranger who stays with you should be regarded as a native to you, and you should love him as yourself; for you yourself were strangers in Egypt. "

The Bible tells of a fugitive. You have to see Jesus in a boat on the Mediterranean Sea

The list of biblical refugees and uprooted people is considerable. It is always driven by the hope for a tolerable present and a better future. Just as God's Son had to experience this shortly after he was born. One must therefore also see in Jesus a refugee, a person who shares the experience of fleeing with many others to this day and who is therefore also to be found among the refugees of this world: in a boat on the Mediterranean Sea, on the mountain routes in Iran.

The Christmas story is a story of being human. Very specific, very simple, up close. The fact that we still remember it today and pass it on also shows that it is far from over. And that she always tells us life and the meaning of life anew and true.

EKiR from A-Z
recommend a page
<?