Why do parents give pacifiers to their babies

Who exactly needs a pacifier?

The note "Pacifier!" Has been stuck on my desk for a long time, with the abbreviation KV / 8 on it (that means "Understanding children, 8th edition" - I choose a chapter for each new edition, which I then read here and there update and add).

So this time the pacifier. From an evolutionary perspective.

It's actually easy to understand what we are offering the babies - a reshaped nipple. And of course they love it, and have been for quite a while: in the Middle Ages, linen cloths tied into bags were fashionable (also with a little poppy seeds in them or sometimes soaked with liquor). The first rubber versions appeared from the middle of the 19th century.

The urge to use a pacifier is understandable - after all, suckling activates the "calming loops" of the child's brain. Sucking conveys closeness, security and relaxation (no wonder that resourceful babies also use fingers, thumbs or even their big toes to help). This behavior is also known to experts as a "non-nutritive need to suckle": Babies not only use the breast as a source of calories and water, but also to recharge their batteries and relax. My baby just wants to suckle now, says one mother. My baby uses my breast as a substitute for a pacifier, says the other - from an evolutionary point of view a very cute explanation: as if the pacifier was actually the original and the breast was just a replacement ... The breast was invented many millions of years ago, 165 million years ago the common ancestor of marsupials and higher mammals developed special glands from which the offspring could lick up or suck up a concentrated secretion (mom no longer had to stuff food into their little mouths as often).

But back to the pacifier. The dummy, however constructed, does not only offer the little ones an opportunity to calm down. She also helps the parents - calm babies are not a luxury. And certainly never have been. So why shouldn't parents be grateful for such "abbreviations"? In fact, the history of baby care is also a history of the search for methods, tricks and products that make life easier for us grown-ups, whether they are carrying frames or hammocks, diapers, cradles, baby monitors or apps for smartphones. Or nipple-like plugs for the baby's mouth. This search for abbreviations is certainly not "unevolutionary" - it is in his nature that Homo sapiens arm themselves with all sorts of cultural achievements in order to make life easier, why should the raising of the offspring of all things be excluded from it? After all, parents are - also, by the way, a basic axiom of evolutionary biology - not inexhaustible bubbling sources from which love, affection and breast milk gush in abundance. Rather, they are also designed to repeatedly negotiate compromises with their offspring when it comes to the sensible use of limited resources.

The pacifier not only fits perfectly in the mouth, it also fits into our cultural concept. And on top of that, this wonderful win-win: pacifier in your mouth - happy baby, happy parents!

... If it weren't for the second part of the story, and this part also results from evolutionary conflict theory. Every cultural solution has advantages - but also possible disadvantages.

Some of them are banal and easily catchy, in the truest sense of the word: the whiskey in the pacifier bags of the Middle Ages was certainly no lubricant for the baby's growing brain. And small children have surely sucked tons of bisphenols and other plasticizers out of the plastic pacifiers of the modern age - not exactly what a growing organism needs. And the bacterial and fungal lawns that tend to form on pacifiers must also be among the disadvantages. So let's be amazed at the self-cleaning power of the mother's breast! (In this minute of silence I just want to blink at the aesthetic dilemma of the pacifier, because we seem to have solved it culturally quite well: actually, such a plastic plug in the middle of the face is not necessarily part of the child's scheme - the baby's mouth was actually intended once. But because Normal for us is what we normally see, do and don't do, we don't notice it anymore - a pacifier mouth is basically part of the trendy look of the "right" baby these days. Our tendency to constantly redefine normality (called culture) makes us So also aesthetically quite flexible - we have somehow gotten used to braces, hipster glasses similar to diving goggles and all sorts of drawings, decorations, implants and metal goods on the human body. Somewhere in the western hemisphere people come out as parents-to-be, that's why they almost get them already reflexively from friends, relatives and Co. the whole product range of NUK, G oldi and MAM delivered.)

A real disadvantage arises from the actual business purpose of the dummy. Because it is clearly aimed at activating the child's calming reflexes. And they are good - yes: for Reassurance. So to relax, to release anxiety, maybe also to heal an "ouch" more quickly. But when it comes to exploring the world, the calming reflexes are more like glue - a child should be awake rather than sedated. Such a little explorer can also make good use of his (functional) mouth on his foray into the world, it literally serves to appropriate your individual parts. But not only that - these expeditions are mostly social processes: you undertake them with others, with mom, dad, other children, a teddy bear. So there will be Relationships designed, and there is communication - good when you can use your facial expressions and speaking tools and express your feelings. A plug in the mouth slows down the dialogue with the co-discoverers in one way or another. (Some researchers even suspect that this could have long-term consequences. At least one larger study reveals an - unfortunately negative - connection between frequent pacifier use and later intelligence. So permanently "plugged" children may not only look tranquil, they will become so also.) 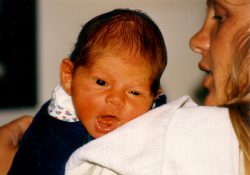 Perhaps something else also plays a role here: a functioning mouth even helps the infant to discover itself. Because when you observe infants, they show a strange behavior: they use their speaking tools again and again spontaneously - and therefore perhaps not without reason! Almost willfully, often out of nowhere, they begin to gargle. To squeak. To grunt. High screams drag through the air. Again and again, and with what pleasure! Flutter your lips. Let grunts tumble out of your mouth. Tips straining the mouth. And so on. Sometimes they produce the sounds with the soft palate, sometimes with the tongue. Sometimes even with the nose. This should serve to build up and train your speaking and music apparatus.

Another connection seems interesting to me. As they gradually learn to sit, infants go through a phase in which they put everything into their mouths with insatiable zeal and the greatest persistence, from the edges of their chairs to their toys. As already mentioned, this "clumping" is seen as part of their exploratory behavior: the children also get to know the world through their mouths. But that could also apply from an immunological point of view. Because the ward phase is actually a foray into the lively world on site and an intensive examination of the environment that is typical of the environment in which you live. It is quite conceivable that research with the mouth also helps to build an immune system that is adapted to the environment. In any case, it is noticeable that the composition of breast milk changes precisely in this phase - it now contains significantly more antibiotic active ingredients and thus provides the child with a real protective shield for its ward instinct.

While the immunological significance of the pacifier-free mouth has only been little researched, clearer conclusions can be drawn from an ENT and dental perspective. According to this, otitis media occur more frequently when the pacifier is used excessively, and misaligned teeth can occur if the pacifier is used for more than three years. There is less research into whether language development suffers at the same time.

So let's get back to the topic: the pacifier from an evolutionary perspective ... It seems as if we have found a "solution" for our parental plight with the pacifier, which we should not overuse. We simply cannot avoid the fact: the baby's mouth is primarily used to meet the world, and only secondarily to receive a dummy.

If it is to be used, it is best to use the same way as the object it replaces - for consolation, for emotional stress or to fall asleep - and not much longer than the "traditional" breastfeeding period of around 3 years. On the other hand, continuous sucking or sucking while exploring the world through play is not intended from an evolutionary perspective - the caregivers may "need" this rather than the children.